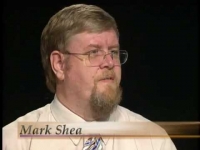 Over at Stream.org, John Zmirak has an interesting article on the latest Planned Parenthood outrage that includes a veritable schooling of Mark Shea: "Catholic writer Mark Shea is leading the charge against Planned Parenthood’s critics. On July 21, Shea condemned the Center for Medical Progress in an online Catholic radio broadcast, where he also said that families sheltering Jews during the Holocaust would have sinned by deceiving the Nazis who hunted those Jews. At 35:30 he quipped, “The issue is not and never has been figuring out how to lie well; the issue is figuring out how to hide your Jews well.” Then he chortled heartily.

REMNANT COMMENT: Really? I always knew Mark Shea prided himself on carrying water for liberals and "progressives" inside the Catholic Church.  But now it begins to appear that liberals anywhere and everywhere can expect to benefit from Mark's peculiar style of brown-nosing should Mr. “I’m So Much More Reasonable Than Thooooose Guys” Shea see an opportunity. Like Donald Trump trying to split political hairs yesterday by defending "certain aspects" of PP "important work for women's health", will Mark actually carry water, albeit in Dixie cups in this case, for Planned Parenthood if it means more thumbs up on his blog? Surely not! So what's this all about? We're all at war with the Culture of Death, right? So why the need to go all school marm against the folks who ripped the mask off the diabolical Planned Parenthood?  Because they supposedly lied? Really, so that venial sin means the expose itself is inadmissible and evil. Puh-leeze! Besides, the Church's teaching on making false statements, mental reservation, and deception is way more nuanced than Shea evidently realizes.

[Comment Guidelines - Click to view]
The Remnant values the comments and input of our visitors. It’s no secret, however, that trolls exist, and trolls can do a lot of damage to a brand. Therefore, our comments are heavily monitored 24/7 by Remnant moderators around the country.  They have been instructed to remove demeaning, hostile, needlessly combative, racist, Christophobic comments, and streams not related to the storyline. Multiple comments from one person under a story are also discouraged. Capitalized sentences or comments will be removed (Internet shouting).
The Remnant comments sections are not designed for frequent personal blogging, on-going debates or theological or other disputes between commenters. Please understand that we pay our writers to defend The Remnant’s editorial positions. We thus acknowledge no moral obligation whatsoever to allow anyone and everyone to try to undermine our editorial policy and create a general nuisance on our website.  Therefore, Remnant moderators reserve the right to edit or remove comments, and comments do not necessarily represent the views of The Remnant.
back to top
Last modified on Thursday, August 13, 2015
Tweet

More in this category: « (Zmirak vs. Shea) The Planned Parenthood Videos: Is It Wrong to ‘Lie’ to Abortionists? Buchanan on Trump's Immigration Plans »