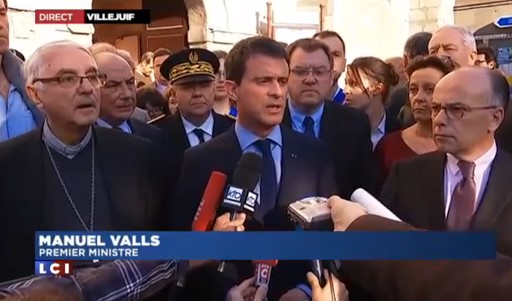 Here are a couple of snippets from an article at Aleteia.org written by John Burger back in April of 2015. Not sure how we managed to miss this one, unless the politically incorrect nature of the French Prime Minister’s comment caused certain mainstream news agencies to bury the story. Stranger things have happened. Check it out:

“[I]n the wake of a thwarted terrorist attack on churches in France this past weekend, Prime Minister Manuel Valls was clear: attending Mass is “the most beautiful and strongest" answer to terrorism.

Valls spoke to reporters while standing next to Bishop Michel Santier of Creteil, the diocese south of Paris where one or more churches were allegedly in the crosshairs of a 24-year-old Algerian national. The plot, foiled when the student accidentally shot himself and called for an ambulance, was, according to Valls, the fifth terrorist attack authorities thwarted since the Charlie Hebdo attack in January.

"What could have happened is a shock to everyone,” Valls said, adding that he wanted to meet with Church officials to express “our deep emotion and our total solidarity…. This time, it was the Christians, the Catholics of France, who were targeted for the first time. Two churches were in the viewfinder of the individual.”

Valls said that “specific protection” is being provided to 178 Catholic places of worship.

To attack a church is to attack “a symbol of France," the premier said… "The faithful of the Catholic religion,” he continued, “must be able to worship, go to Mass in perfect serenity. Moreover, it is the most beautiful and strongest of the answers we need to terrorism, which targets France to divide…. France has a great Christian heritage. Cathedrals, churches, chapels, attract tourists, pilgrims, thousands of the faithful around the world. This heritage must be protected, but must remain open, accessible.” FULL REPORT HERE

REMNANT COMMENT: One wonders if Valls is coming to realize that his boss’s (President Hollande) draconian pro-Muslim “anti-hate” campaign isn’t working out too well.

In any case, though this statement isn’t particularly strong by our standards, by secularist French standards it’s the Edict of Milan. One hopes that after the most recent terrorist attacks in Paris, this seemingly insignificant nod to France's Catholic roots may grow into the beginnings of at least a faint awakening in France, that if France does not remember the promises of her baptism—if she does not recognize the satanic nature of her 1905 law on the Separation of Church and State--she will be destroyed from within and may one day cease to exist altogether.

[Comment Guidelines - Click to view]
The Remnant values the comments and input of our visitors. It’s no secret, however, that trolls exist, and trolls can do a lot of damage to a brand. Therefore, our comments are heavily monitored 24/7 by Remnant moderators around the country.  They have been instructed to remove demeaning, hostile, needlessly combative, racist, Christophobic comments, and streams not related to the storyline. Multiple comments from one person under a story are also discouraged. Capitalized sentences or comments will be removed (Internet shouting).
The Remnant comments sections are not designed for frequent personal blogging, on-going debates or theological or other disputes between commenters. Please understand that we pay our writers to defend The Remnant’s editorial positions. We thus acknowledge no moral obligation whatsoever to allow anyone and everyone to try to undermine our editorial policy and create a general nuisance on our website.  Therefore, Remnant moderators reserve the right to edit or remove comments, and comments do not necessarily represent the views of The Remnant.
back to top
Last modified on Wednesday, November 18, 2015
Tweet

More in this category: « On the Terrorist Attacks and the Kingship of Christ Cardinal Sarah: The pope cannot change divine law on Communion »