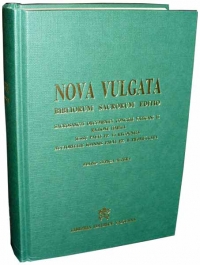 Rome – For more than a thousand years the Vulgate was the ‘authorized version’ of Western Christianity. Not anymore.Vatican II initiated a silent revolution which has now replaced the ancient Vulgate with a new translation. This new official Bible is no longer based on Latin manuscripts and lacks any historic worship tradition in the Church. This Nova Vulgata, as it is presented on the Vatican’s website, is a verse by verse reconstruction of what modernist scholars think the original Hebrew and Greek texts must have looked like.

The Pope was Catholic and the Vulgate was the Bible of the Western Church.  For centuries these were truths that were considered too ridiculous to question. In today’s context, rightly or wrongly, ‘Is the Pope Catholic?’ has taken on a new meaning, but for the Vulgate the situation is worse.

Jerome’s monumental translation has officially lost its status and has been replaced by a product of critical scholarship. When one searches for the ‘Vulgate’ on the Vatican’s website, the only results that come up are links to this new translation Nova Vulgata. Even Google directs it clients, also those who specifically look for the ‘Clementine Vulgate’ to the Vatican’s new Bible.

While the name suggests continuity, this Nova Vulgata is not a new or improved Vulgate edition. It is not even based on Vulgate manuscripts. Instead, the Nova Vulgata is a new translation into Latin. It is only presented as ‘New Vulgate’ because the Vatican has adopted it as the new authorized standard for Church and academia alike. As will be addressed later, both Catholics and scholars have reasons to revolt. In matters of sacred liturgy, secular reason and faith traditions often prove incompatible. READ MORE HERE

REMNANT COMMENT: Of course, scripture tampering has been going on for a long time in the post-conciliar Church, revising Scripture being sort of the classic plaything of Modernists everywhere.  Nevertheless, I'd encourage scripture scholars to examine the latest versions of the Catholic Bible being quietly posted over at Vatican.va

The thing seems to have been "evolving" steadily since the Second Vatican Council, which put forth the mandate for a revision of the Latin Psalter in order to bring it in line with “modern text-critical research”. In 1965, Pope Paul VI established a commission to expand the revision to cover the entire Bible. The revised Psalter was completed and published in 1969, followed by the New Testament in 1971, and the entire Vulgate was completed in 1979. A second edition was then published several years later in 1986. What’s been happening since? Well, let’s find out.

This new & improved Bible has long been under fire by those who see it as a new translation rather than a revision of St. Jerome's work. So perhaps monitoring what’s going on lately might be a good idea. It’s not that we don’t trust the Vatican to do the right thing when it comes to the inspired written word of God, of course. Perish the thought, in fact! It’s just that we’re rather fond of the old Russian proverb (which became Ronald Reagan’s motto): “Trust, but verify”—especially when it comes to our Modernist friends in the Eternal City.

[Comment Guidelines - Click to view]
The Remnant values the comments and input of our visitors. It’s no secret, however, that trolls exist, and trolls can do a lot of damage to a brand. Therefore, our comments are heavily monitored 24/7 by Remnant moderators around the country.  They have been instructed to remove demeaning, hostile, needlessly combative, racist, Christophobic comments, and streams not related to the storyline. Multiple comments from one person under a story are also discouraged. Capitalized sentences or comments will be removed (Internet shouting).
The Remnant comments sections are not designed for frequent personal blogging, on-going debates or theological or other disputes between commenters. Please understand that we pay our writers to defend The Remnant’s editorial positions. We thus acknowledge no moral obligation whatsoever to allow anyone and everyone to try to undermine our editorial policy and create a general nuisance on our website.  Therefore, Remnant moderators reserve the right to edit or remove comments, and comments do not necessarily represent the views of The Remnant.
back to top
Last modified on Friday, May 26, 2017
Tweet