Francis Empowers Bishops to Establish Their Own Liturgical Regulations 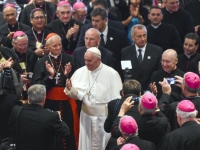 Pope Francis has issued a motu proprio, Magnum Principium, a modification of Canon Law 838, which grants bishops’ conferences greater control over the translation of liturgical texts. This includes the power to make adaptations which the bishops deem appropriate for their regions.

Until now, Canon 838 (§1) stated that "The direction of the sacred liturgy depends solely on the authority of the Church, namely, that of the Apostolic See." Paragraph§2 said: "It is for the Apostolic See to order the liturgy of the universal Church," but now the Apostolic See has the task of "recognizing adaptations approved under the law of the Episcopal Conference." (§2) In other words, the power of the Curia is reduced from authorizing to approving texts that are generated by episcopal conferences.

Paragraph §4 makes it clear that the pope has now given bishops the power to determine much of the Church's liturgical direction. "Within the limits of his competence, it belongs to the diocesan bishop to lay down in the Church entrusted to his care, liturgical regulations which are binding on all."

This opens the door, not only to greater liberty in translating liturgical texts, but to creativity in drafting their own texts and rules. The bishops of an episcopal conference can now decide that if the faithful kneel to receive Communion, receive only on the tongue, or fail to participate in the hand shake of peace, this could be grounds to refuse them Communion.

The new motu proprio also supersedes Pope Benedict's Summorum Pontificum, which dispensed priests from the need to obtain episcopal permission to say the Traditional Latin Mass. With the new ruling, an episcopal conference can now rule that the offering of the Latin Mass is forbidden in a given diocese, or in an entire country, so that traditional Catholics no longer have the option of appealing to Rome for help. The episcopal ruling is now Church law.

What we are seeing is a further attempt to pull the Catholic world away from the Church's centralized authority and have a whimsical free-for-all. Francis himself, on October 17, 2015, called for a "healthy decentralization" of power in the Roman Catholic Church, including changes in the papacy and greater decision-making authority for local bishops, so this latest motu proprio is part of his plan to execute this decentralization.

It calls to mind the subversive designs of Mgsr. Annibale Bugnini—the key liturgical planner of Vatican II and principal architect of Sacrosanctum Concilium—as he relayed them to Masonic Grand Master Licio Gelli in a *letter dated July 2, 1967: "The greatest liberty was given to choose between the various formulas, to individual creativity, and to chaos!"

Under the pretext of making the Faith more accessible to the laity, the enemies of the Church introduced vernacular at Vatican II for the purpose of rendering the Church secular and divided, as opposed to holy and universal. It appears that Rome is now going the full nine yards with this plan.

However, if holiness, unity, and crystal clear communication from God to man is what Francis aspires to, he will promptly scrap these modernist trappings and return the Mass to its original formula in the Latin Tridentine Rite—the formula which accomplished this perfectly through the centuries. This is what Pope Benedict XVI aspired to during his active pontificate, so why shouldn't Francis?

In speaking of the Traditional Latin Mass, Pope Benedict said on April 30, 2011: "What was sacred for prior generations, remains sacred and great for us as well." (Universae Ecclesia)

The irony of all this liturgical updating is that Latin—the very thing that modernists despise—is all too conveniently used as a tool to pull the faithful away from their Latin heritage. Perfidious documents such as the latest are published in Latin to make them appear "religious," but is this not Pharisaic? Vatican bureaucrats should at least have the decency to publish their revolution in their own Esperanto and reserve Latin for the holy things of God.

*This correspondence is taken from Andrea Tornielli's Dossie Liturgia Uma Babel Programada, that appeared in the June 1992 issue of 30 Days.

[Comment Guidelines - Click to view]
The Remnant values the comments and input of our visitors. It’s no secret, however, that trolls exist, and trolls can do a lot of damage to a brand. Therefore, our comments are heavily monitored 24/7 by Remnant moderators around the country.  They have been instructed to remove demeaning, hostile, needlessly combative, racist, Christophobic comments, and streams not related to the storyline. Multiple comments from one person under a story are also discouraged. Capitalized sentences or comments will be removed (Internet shouting).
The Remnant comments sections are not designed for frequent personal blogging, on-going debates or theological or other disputes between commenters. Please understand that we pay our writers to defend The Remnant’s editorial positions. We thus acknowledge no moral obligation whatsoever to allow anyone and everyone to try to undermine our editorial policy and create a general nuisance on our website.  Therefore, Remnant moderators reserve the right to edit or remove comments, and comments do not necessarily represent the views of The Remnant.
back to top
Tweet
More in this category: « Catholic Crackdown: Senate Dems Block Judicial Nominee, for Being Catholic Pope vs Trump: Who's More Pro-Life? »