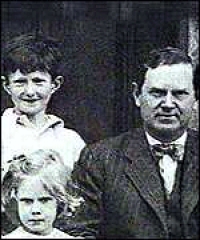 (Penned by the son of the famous British novelist, Evelyn Waugh, Reprinted from The Remnant, July 31, 1977)

"If Paul VI excommunicates the Archbishop he will effectively be announcing that he has set up a new Church in rivalry to the old one."

After all the saber rattling and threats to excommunicate Archbishop Marcel Lefebvre, leader of the traditionalist faction within the Catholic Church, a curious silence has descended on the Vatican.

Nobody has brought out the traditional bell, book and candle.  No comment has been made of any sort.

The Archbishop’s next move was to celebrate Mass before a crowd of 4,000 in the casino at Nice in the South of France – perhaps he’ll turn up at the Lyceum Ballroom one day.

But what will the Pope do next? The most obvious result of the Pope’s intervention has been to direct world attention to a small religious event – the ordination of 14 priests and 24 sub-deacons in a remote Swiss canton – which might otherwise have merited ten lines in the local newspaper.

As it was, television crews turned up from all the major countries of the world and fist fights broke out among rival teams jostling for position.
Auberon Waugh

For many of Britain’s five million Catholics this unexpected silence is the most hopeful thing which has come out of Rome in the 14 years since Pope Paul VI was elected.

If he can now step back from the brink he will save many of them from a crisis of loyalty which may not lead all that number into a breakaway Church, but will certainly cause unhappiness, confusion and possible loss of faith among many more.  If the more hot-headed of the Pope’s reformist advisers get their way, the damage could be much graver than that.

Perhaps I should explain. The Roman Catholic Church for all its problems is still quite easily the biggest international organization in the world, with 425,000 priests and 900,000 nuns administering to a nominal membership of nearly 650 million.

Apart from its size, its chief claims to attention have been its unity and its continuity of tradition. Until the second Vatican Council of 1962-1965, it looked as if it would go on for ever in that mold.

Since then, changes have been set in motion which the Council Fathers may not have foreseen, but which have removed all the old forms of service and altered the emphasis of Church teaching to such an extent that one can only describe them in honesty, as marking an about turn.

Many Catholics may not have noticed the new emphasis in teaching, and quite a few prefer the new services.  Children especially are said to be happier with the simple form.

Personally, I must admit that I am not among their number.  I find the flat language, intellectual banality and patronizing manner of the new services more reminiscent of Blue Peter [a British television program for children] than anything else.

The important thing is that many Catholics are understandably bewildered at being presented with an entirely new set of beliefs and practices, and it is in this context that one must look at the present crisis in the Church, and the Pope’s threat to excommunicate Archbishop Marcel Lefebvre. Lefebvre is a simple, obstinate, transparently honest man, who in the eternal struggle between authority and conscience has come down heavily on the side of personal conscience. He believes that the new forms of worship in the Church are devoid of spiritual content, and the new teaching is profoundly wrong.  Worse than that, he says so, and continues to use the old forms and teach the old doctrines.

This puts Pope Paul in something of a dilemma. If he excommunicates the Archbishop he is announcing that the old teachings were false and the old forms of service, followed by generation after generation of Catholics, were wrong.

Excommunication, I should explain cuts a person off from the community of the faithful, and in Catholic theology this community includes not only practicing Christians on Earth, but also those in Heaven – in other words those who have made it under the old rules.

Against the Archbishop’s insistence on continuity as an essential characteristic of the Church stands the traditional Catholic teaching on authority and obedience.

It is yet another example of an immovable body meeting an irresistible force.

But if the Pope chooses the collision course, he may leave the Church in the greatest disarray since the Reformation.  Let us look at the alternatives before him:

If he says no more, then it seems likely that the Archbishop will eventually die without having consecrated any new bishops.  Under those circumstances, his followers will eventually be returned to the Church as one more pressure group inside it which might or might not prevail in the long run.

It will essentially be business as before, with a slightly wider range of choice for practicing Catholics.

If he excommunicates the Archbishop he will effectively be announcing that he has set up a new Church in rivalry to the old one.

Perhaps the new Church will prove to be the wonder product its inventors claim.  Time will tell. But I don’t think that many except the most entrenched anti-Catholics can find much to rejoice about in the threat to the world’s oldest and biggest international religion.

The present Papacy has not distinguished itself by the wisdom or far-sightedness of its decisions. While most people of good will hope that Pope Paul will choose the course of moderation, loyal Catholics the world over will be praying that he steps back from the brink of catastrophe.
Published in Remnant Articles
back to top
Last modified on Tuesday, September 30, 2014
Tweet
More in this category: « The Rise of Bergoglianism Pardon, Not Forgiveness: "Cor mundum crea in me Deus et spiritum innova rectal visceribus Meis" »