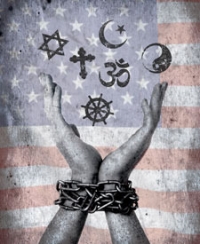 Remnant readers are surely aware of the recent news surrounding two planned Satanic rituals, or Black Masses, and the condemnations they have elicited from Catholics throughout the country. However, a certain irony in this entire affair may have been missed by many.

During the five decades that have followed Vatican II’s “Declaration on Religious Freedom” (Dignitatis Humanae),[1] the post-conciliar hierarchy has repeatedly and emphatically stated that religious liberty is fundamental to human dignity. Thus while they fawn over backwards to accord religious liberty to an entire spectrum of false religions, they nevertheless deny this “right” to Satanists.

The reasoning behind this denial of religious liberty to Satanism is no doubt based upon the fact that it has a “diabolical orientation” and is “intrinsically evil”. Forgotten though in this truthful observation is that all false religions—as innocent as they may seem—have a diabolical orientation in that they mislead souls away from the Truth (of the One, Holy, Apostolic and Catholic Faith), and thus are also intrinsically evil.

Yet this truth has been lost amongst post-conciliar ecumenists, who while rejecting any ecumenism with Satanism because it is not a “nice” religion, nonetheless do not hesitate to consort with such demonic cults as Hinduism, Voodoo, Animism, New Age, and others.[2] Have they forgotten these clear admonitions of Sacred Scripture (let alone Mortalium Animos)?

For all the gods of the Gentiles are devils: but the Lord made the heavens. (Psalm 95:5)

From St. Paul the Apostle:

Please subscribe to The Remnant and become part of the strongest journalistic voice in defense of traditional Catholicism in the United States today. Right now our e-edition (comes out every two weeks and is exactly the same as our print edition) is availble for just $25!

Order your e-subscription today and see what everyone is talking about!

The Remnant is fighting on the frontline every day, but we can't hold this ground without your help!

So what makes the devils of the aforementioned demonic religions more deserving of religious liberty or ecumenical outreach than Satanism? Doesn’t Satanism also adhere to certain “common denominators” or “contain elements of truth”? Consider what was said to a stunned Calvinist preacher (who did not believe in the Real Presence) during the famed 16th century exorcism of Nicola Aubrey with the Blessed Sacrament:

Readers may consider this article’s premise as rather ludicrous, outlandish. Perhaps. But the point being made is intended to awaken the sensus Catholicus: when taken to its full logical consequence, religious liberty is a pernicious error which has grievous consequences to individual souls as well as entire nations.

Nor will the promotion of religious freedom save the Catholic Church in the United States from the growing persecution of a government that was founded on the principles of Liberalism[4] — an error that ultimately voids Truth in favor of error.

Let us pray to St. Michael the Archangel that he will continue to protect us from every snare of the Devil—even those that appear “politically correct”. Even more so, let us turn incessantly to the Immaculate Conception, patroness of our nation, “who crushes all heresies” and “who will crush the head of the serpent”.

1 For more details about this conciliar document, see from Angelus Press: Religious Liberty Questioned, The Catechism of the Crisis of the Church, and Time Bombs of Vatican II.

2 Just consider the infamous Assisi inter-religious prayer meetings to which representatives of these sects were invited, let alone the ecumenical acts of Pope John Paul II.

3 See the full story and related texts of the exorcism here.

4 To better understand the poisonous effects of Liberalism and Modernism, I suggest these titles from Angelus Press: One Hundred Years of Modernism, The Liberal Illusion, and Against the Heresies.

Published in Remnant Articles
back to top
Last modified on Monday, August 4, 2014
Tweet

The Remnant is currently supported by dozens of Catholic freelance writers.

More in this category: « Recalling Why They Resisted: A Letter from Archbishop Lefebvre to Cardinal Ottaviani Shock and Awe: Marriage and Martyrdom for Iraqi Catholics »