At this point in the Bergoglian Debacle, the recognition that Francis is a threat to the integrity of the Faith has become so well established in mainstream commentary that even an Anglican theologian, writing in First Things, has sounded the alarm.

“Is the pope Catholic? For at least a century, this was the way we Anglicans joked about anything that seemed too obvious to state,” writes Gerald McDermott, holder of a theology chair at Beeson Divinity School.  But, he continues: “Now we must ask in seriousness whether the pope is a liberal Protestant.”

Traditionalists are often derided by neo-Catholic commentators for relying on supposedly apocryphal quotations from Popes or saints bearing on the current ecclesial crisis.  But these critics never demonstrate that the oft-cited quotations are apocryphal; they merely assert that they must be, as they seem too probative to be true.  This is often done in comment boxes or responses to online queries at neo-Catholic websites, wherein the neo-Catholic commentator professes he can find no source for a given quotation—meaning he hasn’t bothered to do any serious investigation beyond a few Google searches. 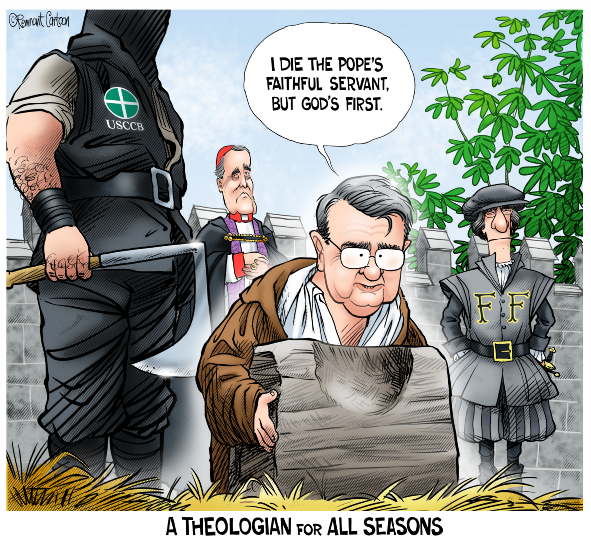 The Correctio, of which I am one of the original signatories, identifies “7 heretical positions about marriage, the moral life, and the reception of the sacraments” that have been spreading throughout the Church solely on the basis of the moral novelties of Amoris Laetitia (AL). Chief among these unheard-of propositions is that divorced and “remarried” people may receive absolution and Holy Communion without ceasing their adulterous sexual relations while they “discern” their moral obligation according to “the concrete complexity of one’s limits” (AL 303).  In short, situation ethics applied to the exceptionless Sixth Commandment in order to excuse sexual relations outside of marriage, which are intrinsically evil and never permissible under any circumstances. To quote John Paul in Veritatis splendor, whose teaching, in line with all of Tradition, is now being overthrown in practice in one diocese after another:
Published in Fetzen Fliegen
Tagged under
Read more...

Fastiggi and Goldstein Ignore Reality and Thump on “the Rules”

The headline of their piece declares that “Critics of Amoris laetitia ignore Ratzinger’s rules for faithful theological discourse.” The authors expend 2,000 words (including footnotes) thumping on “Ratzinger’s rules”—which have no application to the Correctio, as discussed below—while egregiously mispresenting the circumstances that led to the Correctio being published.

In their relentless effort to defend the indefensible, the participants in the neo-Catholic commentatriat have been pushed to new extremes by the exigencies of the current pontificate.  Confronted with a Pope who is determined to undermine the contrary teaching of his predecessors on the “intrinsic impossibility” of absolution and Holy Communion for people who intend to continue engaging in sexual relations with people to whom they pretend to be “remarried” by way of civil divorce, the Neo Catholic Excuse Factory has trotted out its latest polemical model: the 2017 Inerrant Papacy.

Wait! Wait! It’s all a MISTRANSLATION! 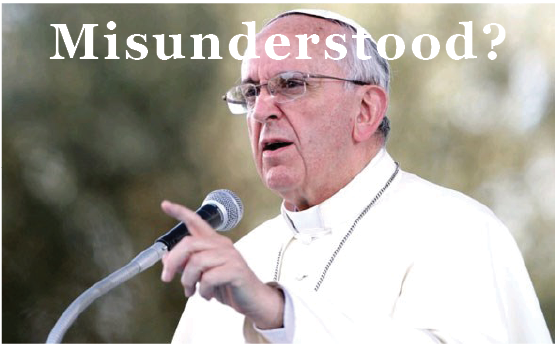 A year-and-a-half later, Fastiggi and Goldstein Ride to the Rescue of Amoris Laetitia

Well, it seems the Neo-Catholic Excuse Factory is still in operation, even if the excuse-makers seem to have lost some of their usual vim and vigor due to the intellectual exhaustion involved in attempting to explain away practically everything Pope Bergoglio says and does on a daily basis. Consequently, the factory’s output of excuses is experiencing significant lag times.

George Weigel has a reputation, largely among Catholics who have never read him, as a nuanced thinker on matters Catholic, uniquely in the know not only about current Church affairs but also their significance in the larger context of ecclesiastical history.  But as Weigel’s article in First Things concerning Remnant TV's "Catholics Rising" video on the upcoming Catholic Identity Conference demonstrates, his writing is too often shallow cant thinly disguised by fancy locutions.

Under the portentous title “The Transmigration of Theological Nonsense,” which seems to promise serious thought, we find little more than Weigel’s petty quibbling over a couple of Michael Matt’s remarks in the video to the effect that we ought to “take our Church back” from those who have corrupted her doctrine and praxis since Vatican II, as any Catholic who is not comatose can see. With his usual air of pseudo-professorial condescension toward the traditionalists he considers infra dig, Weigel declares: “The Church is not ‘ours’; the Church is Christ’s.” Quoting himself, Weigel adds: “the Church ‘was not created by us, or by our Christian ancestors, or by the donors to the diocesan annual fund—a point the Lord made abundantly clear himself in the gospels: ‘You did not choose me, but I chose you’…”

Socci on Bergoglio as “Jesus II”

As the Filial Correction to which I am a signatory continues to gather support that now includes Bishop René Gracida, Bishop Emeritus of the Diocese of Corpus Christi, Pope Bergoglio is facing an unprecedented display of opposition from “mainstream” Catholics who are awakening to the astounding debacle of this out-of-control papacy.

Antonio Socci gives a surprising new indication of just how out-of-control Bergoglio is in his column of September 24, entitled “What He Did He Wanted to Do as ‘Pope Jesus II’, the Demolitionist” (translation mine).  He begins by noting that in the just-published book-interview with Dominique Wilton, Bergoglio jokes that he chose the papal name Francis not as an act of superbia but rather of humility, because then “he would have been able to call himself ‘Jesus II’”—a reference to the common description of Saint Francis of Assisi as an alter Christus, “another Christ.” While this was only a joke, it was a very revealing one: the phrase “Jesus II” evinces an arrogant flippancy regarding both Our Lord and the great saint who is popularly likened to Him.

Socci believes that Bergoglio suffers from a dangerously acute case of that classically Argentinian egocentrism Bergoglio himself once remarked when he joked that an Argentinian commits suicide by throwing himself from the top of his ego.  This, writes Socci, is “a very big problem which a psychoanalyst attempted to resolve—futilely—years ago” (a reference to Bergoglio’s revelation to Wilton that he had undergone weekly psychoanalysis for six months with a Jewish psychiatrist). And this very big problem is immensely exacerbated by what Socci describes as “ego-latria in the form of a planetary papolatry.”

Bergoglio, says Socci, “seems to want to ‘re-found’ the Church and almost present himself precisely as ‘Pope Jesus II’”, who “pretends in fact to be more merciful than Christ” respecting those living in adulterous “second marriages” and dares to pursue what his collaborators exultantly characterize as “irreversible reform” of the Church.  But, Socci continues:

the Church belongs to Jesus Christ, not to the Pope.  The popes are only its temporary custodians, not its owners…. By definition, only the Law of God is “irreversible,” which is in Sacred Scripture and the constant Magisterium of the Church. The Popes are subject to that Law, they are not its masters. They must be like chauffeurs who bring the Bride (precisely the Church) to the encounter with the Bridegroom (Christ Himself).  If the chauffeur wants to appropriate the Bride to himself and… change the destination in an irreversible way, then he would be saying that he has substituted himself for the true Bridegroom.  As if he were a “Jesus II”…. ]

In fact, the mandate that Jesus gave to Peter and all his successors is not at all to ‘change’ the Church (much less in an ‘irreversible’ way) but—on the contrary—to ‘conserve’ her (to conserve the depositum fidei, confirming the brethren in the faith)…. The Pope—by definition—is only a ‘conservator,’ otherwise he is no longer the Pope.  His ministry is to preserve intact the faith of the Church. Not to make of her a woman out on the street at the mercy of the world.

This Pope, Socci maintains, is in the process of attempting to change the Church from a supernatural institution whose mission is to save souls into “a humanitarian agency which professes an entirely social and political religion, centered on mass immigration as the Summum Bonum, ecological catastrophism and an uncritical embrace of Islam.” What Bergoglio is attempting is precisely the destructive process foretold by the atheist philosopher Feuerbach, who predicted that the Church would (per impossible) be destroyed through “an irreversible transformation of Christianity into atheistic humanism, with the aid of Christians themselves, guided by a concept of charity that will have nothing to do with the Gospel.”

And now—here is Socci’s most startling observation—Bergoglio seems intent on finding a way to eliminate or at least decommission the Roman Curia and even the College of Cardinals, both deemed non-essential by his “right-hand man,” Archbishop (“the art of kissing”) “Tucho” Fernandez, whom Bergoglio made a titular archbishop of a titular see as one of his first acts. This would leave the way open, in “exceptional situations,” for Bergoglio to “name his own successor… rendering his revolution truly ‘irreversible.’”  Which possibility, believe it or not, Bergoglio “is having studied on the pages of canon law.”

By the way, whatever happened to the Humble Pope narrative with which this pontificate began?  Perhaps the promoters of this con job on the Bergoglian PR team and their allies in the media have recognized that it has become too absurd to fool anyone except those who insist on being conned.

Is it possible, as Socci suggests, that we have underestimated the extent of the Bergoglian Debacle?  God help us.  God help His Holy Catholic Church.  And may God deliver us and the Church from a Pope who is increasingly revealing himself to be—one must say what has become obvious—a clear and present danger to the Faith. 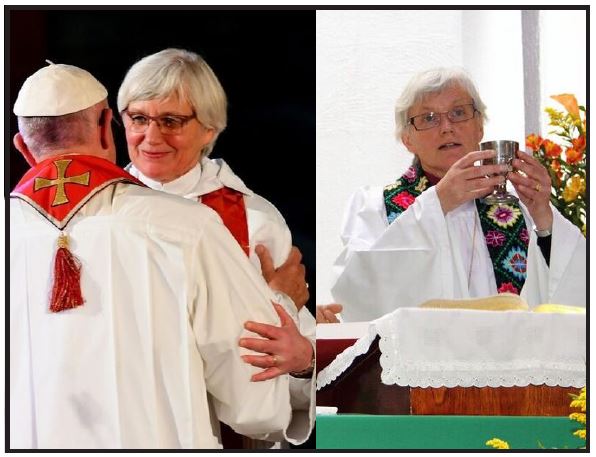 Published in Remnant Articles
Tagged under
Read more...
Page 8 of 22