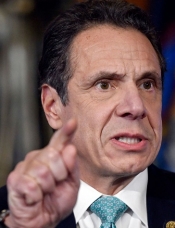 After the horrific attack on 9/11 a generation ago, New York City found itself grossly short of medical supplies once COVID-19 made the Big Apple our nation’s disaster epicenter for the second time in less than 20 years.

Cuomo’s whining about not having enough ventilators was overblown, along with his moral preening to save “just one life.”  Cuomo then ordered nursing homes to accept previously hospitalized COVID–19 patients, exacerbating the outbreak, making his virtuous save “just one life” a national shame.  Moreover, last year Cuomo signed into law a bill legalizing abortion up until birth.  So much for saving “just one life”, when 105,380 in 2017 were murdered through abortion.

Cuomo has governed the Empire State as the epicenter of leftism.  In 2014, Cuomo infamously bellowed that “extreme conservatives” who are “right-to-life” and “pro-assault-weapon” do not belong “in the state of New York, because that’s not who New Yorkers are.”

When Trump delivered the ventilators, Cuomo had so many he supplied other states in need.  When Trump ordered the Navy hospital ship Comfort into New York harbor with its thousand-bed capacity, only six patients were initially hospitalized.  The Comfort never came close to capacity, and has since departed.  Cuomo also wants billions of federal tax dollars to bail out New York’s massive debt – the second largest in the nation.

The predictable scrum of partisan politics never wanes even during a national pandemic.

Cuomo’s feud with Trump along with his televised daily press conferences have provided a nonstop, partisan infomercial on a national stage.  The result of which saw his approval rating jump 27-points. Cuomo is playing it up, while indirectly campaigning for president knowing that this summer the Democratic National Committee (DNC) could be headed toward a brokered convention.

The Democrats need a deliverer who is not a Brooklyn septuagenarian socialist, Bernie Sanders, or a timeworn, lifelong, Washington insider, Joe Biden—who so far is the Democratic nominee heir apparent.  Biden, however, is gaffe-prone and recently added sexual assault charges to his resume, creating the perfect political storm for his exit.

It is Cuomo, son of New York Democratic Party royalty, the late Mario Cuomo, that can fit the bill because when the mainstream media has your front, flank, and rear lines covered – you are politically canonized—an essential element necessary to defeat Trump in November.

The COVID-19 political football has it first and ten for St. Andrew of Albany, who has been spotted two touchdowns in a goalpost shifting political zeitgeist.  The press would never suggest Cuomo owns responsibility for the nation’s worst outbreak of COVID-19.

Cuomo fails to understand that God employs people to be his hands and feet.

The media’s halo for Cuomo burns bright, owing to his zealous endorsement of leftism’s dual sacraments: abortion and gay marriage.  It was his father Mario who pioneered the “Democrat Cuomo Creed” on abortion in a 1984 speech at Notre Dame, no less: “I am personally opposed, but ... ” that has provided cover for Catholic Democratic politicians who reject the Church’s teaching.  A generation of Catholic politicos have personalized it ever since, including his son.

This is another flaw of leftism. Leftists have no issue with embracing church teachings when it supports their ideology, but reject them when such teachings don’t conform to their politics.

Naturally, Cuomo claims he is not running for the nomination because it is a political faux pas to campaign during a national crisis.  However, come August, the DNC may convince him to save their party from Biden and Sanders, while rescuing the nation from Trump.

[Comment Guidelines - Click to view]
The Remnant values the comments and input of our visitors. It’s no secret, however, that trolls exist, and trolls can do a lot of damage to a brand. Therefore, our comments are heavily monitored 24/7 by Remnant moderators around the country.  They have been instructed to remove demeaning, hostile, needlessly combative, racist, Christophobic comments, and streams not related to the storyline. Multiple comments from one person under a story are also discouraged. Capitalized sentences or comments will be removed (Internet shouting).
The Remnant comments sections are not designed for frequent personal blogging, on-going debates or theological or other disputes between commenters. Please understand that we pay our writers to defend The Remnant’s editorial positions. We thus acknowledge no moral obligation whatsoever to allow anyone and everyone to try to undermine our editorial policy and create a general nuisance on our website.  Therefore, Remnant moderators reserve the right to edit or remove comments, and comments do not necessarily represent the views of The Remnant.
back to top
Last modified on Saturday, May 9, 2020
Tweet

More in this category: « Joseph Ferrara, Requiescat in Pace Coronamania III:  Requiem for a Myth »