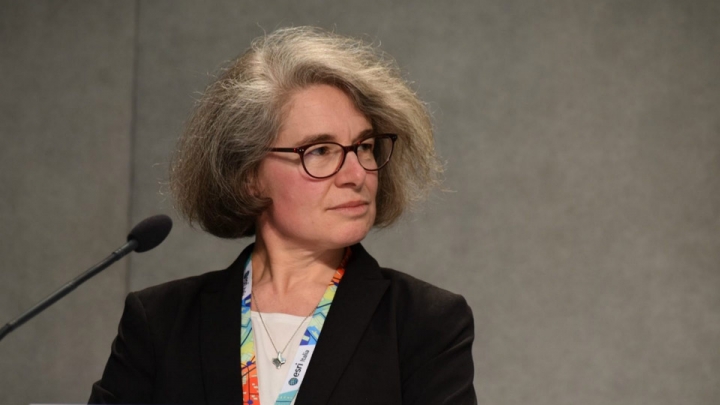 Always up for some boat-rocking, Pope Francis has appointed a woman as under-secretary to the Synod of Bishops.

This will be the first time a woman will have voting rights within the Synod body.

Synods themselves are fairly new, best known for being nauseating buzzword generators and for not fixing anything.

This new female under-secretary is Sister Nathalie Becquart, a nun who doesn't like her habit.

"Ms. Becquart" as she is called by "idiots" who mistake her lack of habit for lack of vocation, has been a consultant for the synod since 2019.

And as everyone knows, European nuns who've ditched their habits are always friendly toward conservative Catholics. They never lash out against, for example, clerics like Archbishop Viganò for supporting God-fearing world leaders.

The Vatican announced the news on February 8 via twitter:

The Synod's secretary-general, Cardinal Mario Grech, said the appointment showed that "a door has opened," and noted that the decision reflects the Pope's desire "for a greater participation of women in the process of discernment and decision-making in the church".

Well, we all like open doors, don't we? Can't wait to see where this one leads!

[Comment Guidelines - Click to view]
The Remnant values the comments and input of our visitors. It’s no secret, however, that trolls exist, and trolls can do a lot of damage to a brand. Therefore, our comments are heavily monitored 24/7 by Remnant moderators around the country.  They have been instructed to remove demeaning, hostile, needlessly combative, racist, Christophobic comments, and streams not related to the storyline. Multiple comments from one person under a story are also discouraged. Capitalized sentences or comments will be removed (Internet shouting).
The Remnant comments sections are not designed for frequent personal blogging, on-going debates or theological or other disputes between commenters. Please understand that we pay our writers to defend The Remnant’s editorial positions. We thus acknowledge no moral obligation whatsoever to allow anyone and everyone to try to undermine our editorial policy and create a general nuisance on our website.  Therefore, Remnant moderators reserve the right to edit or remove comments, and comments do not necessarily represent the views of The Remnant.
back to top
Last modified on Saturday, February 27, 2021
Tweet

More in this category: « THE IDOLATRY OF VATICAN II: Francis and the War on Tradition Left Turns: News Roundup »