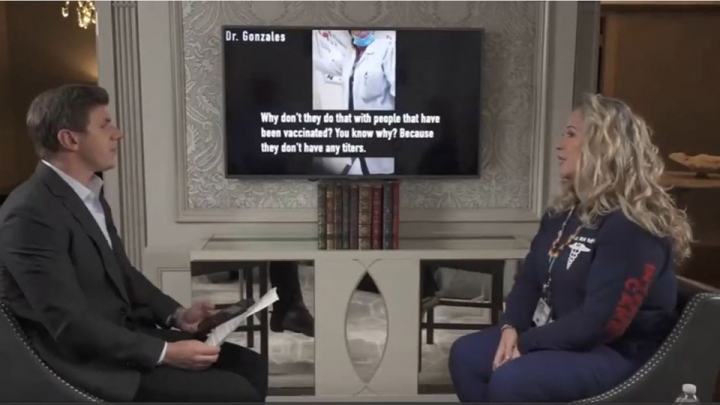 Jodi O’Malley works at an Indian Medical Center in Arizona. She recorded doctors and other hospital staff discussing various cases of adverse reactions in which previously healthy people were injected with the experimental Covid-19 injections before becoming very sick.

Some of the people she recorded were quietly panning the so-called “vaccines” while others were supporting them. This has been the dynamic in hospitals across the country as those who have been indoctrinated into believing the vaccines are effective or bullied into staying silent about them apply pressure to those who want to blow the whistle.

O’Malley also recorded a situation in which it was revealed doctors were not allowed to prescribe Ivermectin as a treatment for Covid-19. This has been a common theme as well, especially in government-funded hospitals. The goal is to get everyone in America and around the globe “vaccinated” and treatments that include Ivermectin stand in the way.

This is an example of how RTV's "To Hot for Big Tech" works. YouTube can't hide or pull down these important videos, so long as we put them on Remnant-TV.com first.

[Comment Guidelines - Click to view]
The Remnant values the comments and input of our visitors. It’s no secret, however, that trolls exist, and trolls can do a lot of damage to a brand. Therefore, our comments are heavily monitored 24/7 by Remnant moderators around the country.  They have been instructed to remove demeaning, hostile, needlessly combative, racist, Christophobic comments, and streams not related to the storyline. Multiple comments from one person under a story are also discouraged. Capitalized sentences or comments will be removed (Internet shouting).
The Remnant comments sections are not designed for frequent personal blogging, on-going debates or theological or other disputes between commenters. Please understand that we pay our writers to defend The Remnant’s editorial positions. We thus acknowledge no moral obligation whatsoever to allow anyone and everyone to try to undermine our editorial policy and create a general nuisance on our website.  Therefore, Remnant moderators reserve the right to edit or remove comments, and comments do not necessarily represent the views of The Remnant.
back to top
Last modified on Tuesday, September 21, 2021
Tweet
More in this category: « A Laywoman’s Reflections on the Vaccine Milling Around »