Men of Iron: Another Portrait of the Preconciliar Catholic Priest 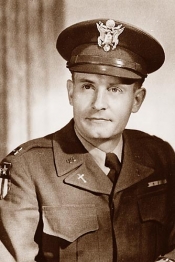 The story of Father Kapaun is Catholic from cradle to unmarked grave. It is a testament to the indomitable Catholic spirit which even here in America has always distinguished itself by its force of goodness, grace and uniqueness.

What will happen to America when that spirit is no more? Where will she turn when the Father Kapaun’s are all dead and buried? Who will be her heroes then?  Who will comfort her dying soldiers?  Who will bring the light of Christ into the stifling darkness of her Godless cities?

, I found myself pitying the man. He’s just another pawn of the ancient Enemy of our Creator. He has never known Christ; he never knew the Catholic Church which priests such as Father Kapaun served; he is the product of a broken family;  he, like millions, is a victim of the Godless new world that has turned its back on Christ; he is so lost now that even he must suspect he’ll never be found. “Father, forgive him for he knows not what he does” is all one can say for our hopeless, hapless President.

May God lead us all out of this valley of the shadow of death into which our beloved, if tormented, homeland has descended. God save America. Father Emil Kapaun, Pray for us. MJM

Published in Fetzen Fliegen
back to top
Last modified on Friday, July 25, 2014
Tweet