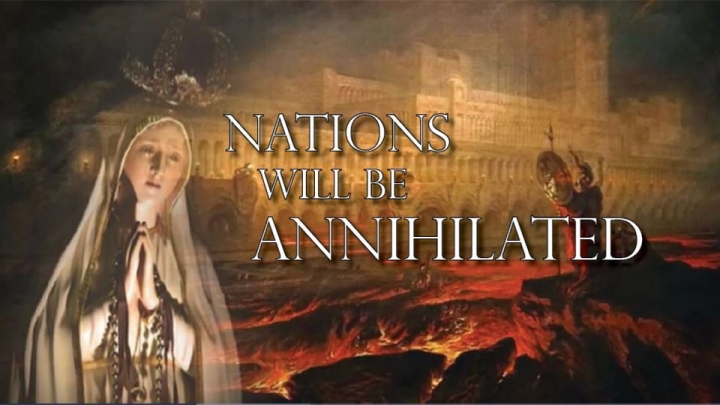 Thanks to Vatican journalist Diane Montagna for once again jumping on an important story. This afternoon she tweeted: "On March 25, Pope Francis will consecrate Russia & Ukraine to the Immaculate Heart of Mary, during a 5pm penance service in St Peter’s Basilica. The same act, on the same day, will be carried out in Fatima by His Eminence Cardinal Krajewski, as envoy of the Holy Father."

But, here's the thing: Pope Pius XII consecrated RUSSIA to the Immaculate Heart of Mary way back in 1952. He did not do so, however, in union with the world's bishops as requested by Our Lady of Fatima, which is why Sr. Lucia later made it clear that Our Lady's request to consecrate Russia had not yet been met.

Now, Francis says he'll do something even more strange: Consecrate Russia AND UKRAINE, but also not in union with the bishops of the world.

Nice but, once again, not what Our Lady specifically requested. Why not?

No matter where you come down on the Crisis in Ukraine, can you think of a more perfect opportunity than this for the Pope, united with all his bishops, to finally and at long last consecrate Russia to the Immaculate Heart of Mary?

It would be so easy to finally do it right. . . to just do what she asked. Why now? Well, perhaps a better question is: Why not now?

It's win/win for everybody! So why not just do it right? It's almost as if the Vatican will do anything other than obey the Mother of God's very specific requests.

Words matter. This is not about geography and where Ukraine is located on a map in relation to Russia. It's about the very specific words of a Consecration formula, given by Our Lady herself.

So, for example, if I were to intentionally change the form of Baptism by adding nice words like "Amen" and "Halleluiah" to the form, I would invalidate the Sacrament. Why? Because the formula matters, and it does NOT include "Amen" or "Halleluiah".

Our Lady did not ask for Ukraine to be consecrated. She specified Russia for a very specific reason, evidently because Russia was "spreading her errors" (atheism) throughout the world.

A Consecration has a formula. It's not merely a prayer for peace. Our Lady wanted Russia consecrated to her Immaculate heart for a very specific reason – part of which was to stop atrocities such as Joseph Stalin’s extermination of 3 million Ukrainians in the 1930s.

Then again, there are two parts to this, obviously, the second of which is the daily Rosary and the First Saturday devotions. How many Russian Orthodox have been doing that do you suppose? For that matter, how many Latin Rite Catholics have done the five first Saturdays devotion of reparation to the Immaculate Heart of Mary, as Our Lady requested?

My theory? The Consecration of Russia is not a magic trick which will fix everything for an unfaithful world. All of Our Lady's requests must be met, including those she made of us. Her Consecration of Russia will be done, eventually, when an old pope will come up out of the catacombs amidst the rubble of a bombed out Vatican City in a post-world war future and finally — and at long last — do what she asked.

And then there will be peace.

Our Lady of Fatima, pray for us.

[Comment Guidelines - Click to view]
The Remnant values the comments and input of our visitors. It’s no secret, however, that trolls exist, and trolls can do a lot of damage to a brand. Therefore, our comments are heavily monitored 24/7 by Remnant moderators around the country.  They have been instructed to remove demeaning, hostile, needlessly combative, racist, Christophobic comments, and streams not related to the storyline. Multiple comments from one person under a story are also discouraged. Capitalized sentences or comments will be removed (Internet shouting).
The Remnant comments sections are not designed for frequent personal blogging, on-going debates or theological or other disputes between commenters. Please understand that we pay our writers to defend The Remnant’s editorial positions. We thus acknowledge no moral obligation whatsoever to allow anyone and everyone to try to undermine our editorial policy and create a general nuisance on our website.  Therefore, Remnant moderators reserve the right to edit or remove comments, and comments do not necessarily represent the views of The Remnant.
back to top
Last modified on Tuesday, March 15, 2022
Tweet