Vatican Spokesman Clarifies Statements Made by “The Good Sisters of Old” 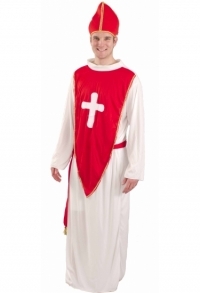 A-CNN Special Report: Now that the Vatican has ended its seven-year investigation of the Looney Communities of Women Rebels (LCWR), a jubilant Ima Cardinal Hairatik called a press conference in order to lay to rest once and for all the lies and deceits of the “Good Sisters of Old” (various pre-conciliar women’s religious orders). The major points of the Cardinal’s statements are as follows:

-        The Vatican is painfully aware that students taught in pre-Vatican II Catholics schools still harbor malicious fallacies perpetrated by nuns teaching in Catholic diocese world-wide. Whether their intentions were noble or not, the fact remains that these former rigid teachings are in conflict with the new theology being promoted by the Post-Vatican II Church and the Sisters of the LCWR.


-        The “Good Sisters of Old” taught without compromise that the Eucharistic was truly the Body, Blood, Soul and Divinity of Christ and therefore only the consecrated hands of a validly ordained priest could touch the Sacred Host. They also taught that the Sacred Host could only be received by those in the state of grace (whatever that means!) on the tongue while kneeling. We now know that this was a severe form of elitism which can only lead to pride and uncharitable thoughts against our non-Catholic brethren.

-        While many of the works of the Old Sisters were admirable in hospitals and orphanages, the damage they caused by teaching that the tenets of the Catholic Church were unchangeable and not open to new ideas cannot be dismissed. As we now know, the Catholic Church is always in flux, investigating new and novel ways to “open the windows to the world.”

-        A vast majority of the “Good Sisters of Old” left permanent negative impressions on their pupils by obsessing that behavior in Church must reflect the adoration and honor due to the “House of God”, insisting on genuflecting before the Tabernacle, proper attire including head coverings for women. This is in total contradiction with the loving, casual and warm atmosphere of Catholic communities which celebrate the “People of God” in a shared meal.

-        Catholics who were subjected to habited nuns living in neighborhood convents during the 1950’s may remember the excitement and anticipation of revealing the Third Secret of the so-called Fatima apparitions by the Supreme Pontiff in 1960. It is now known that “the Good Sisters” tended to exaggerate the importance of this event. This was a private revelation not worthy of discussion.

-        The pre-Vatican II nuns spoke of traditional family values as if the Catholic Church corned the market on what is right and what is wrong. The coming Synod on the Family should put these crazy notions to rest.

-        Some of the words used by these disillusioned fanatical women included “teaching”, “preaching” and “conversion”. Their limited vocabulary never used the words “choice”, “ecumenical”, “environment” or “climate control”. Thanks to the timely end of the frivolous investigation of the LCWR , we could now look forward to proceeding full speed ahead with the cool, hip, independent-thinking new breed of “nuns” in total conformity with the magisterium of New Church gone-wild.


Ima Cardinal Hairatik ended the press conference by expressing his relief and happiness in exposing the lies and fanaticism of the “Good Sisters of Old.” If they were telling the Truth, it must be admitted that New Church is lying and in error. We cannot allow that to happen. The future of the Church depends on it.

In closing, Cardinal Hairatik announced a new investigation of Traditional Women’s Religious Orders “in full communion” with Rome in order to end their stubborn attachment to the old ways including the antiquated and obsolete liturgy. It should not take long. We don’t expect to find any.

[Comment Guidelines - Click to view]
The Remnant values the comments and input of our visitors. It’s no secret, however, that trolls exist, and trolls can do a lot of damage to a brand. Therefore, our comments are heavily monitored 24/7 by Remnant moderators around the country.  They have been instructed to remove demeaning, hostile, needlessly combative, racist, Christophobic comments, and streams not related to the storyline. Multiple comments from one person under a story are also discouraged. Capitalized sentences or comments will be removed (Internet shouting).
The Remnant comments sections are not designed for frequent personal blogging, on-going debates or theological or other disputes between commenters. Please understand that we pay our writers to defend The Remnant’s editorial positions. We thus acknowledge no moral obligation whatsoever to allow anyone and everyone to try to undermine our editorial policy and create a general nuisance on our website.  Therefore, Remnant moderators reserve the right to edit or remove comments, and comments do not necessarily represent the views of The Remnant.
back to top
Read 5823 times
Tweet
More in this category: « Breaking News: Pope Assigns SSPX-SWAT Team as Missionaries of Mercy, Voris Objects Pope Francis’ NDE (A Tridentine Carol) »