In Reparation for the Black Mass: Gratitude to Archbishop Coakley 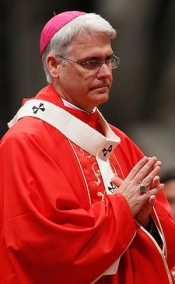 Cheryl K. Chumley of The Washington Times reported that dozens turned out for a weekend satanic ‘black mass’ in Oklahoma City — but hundreds more turned up to protest the event.

Between 40 and 50 attend the satanic ritual at a small theater in the bottom of the Oklahoma City Civic Center, The Oklahoman reported. The event was led by Adam Daniels, a self-professed devil worshiper who said ceremonies included denouncing Jesus Christ and spitting on water that’s supposed to symbolize the Communion host, Fox News reported.

An estimated 1,200 Roman Catholics converged onto St. Francis of Assisi Church for a holy hour prayer service from Archbishop Paul Coakely — and another 400 who couldn’t fit into the congregation stood outside the facility, Fox News reported.

Among Mr. Coakley’s preachings were claims that “dark forces” had targeted Oklahoma City, but that Christians shouldn’t fear.

“We know that Christ conquered Satan,” he said, Fox News reported. “The war has been won, Christ has conquered, though skirmishes will continue until Christ comes to reign forever.”


Archbishop Coakley on a Planned Black Mass in Oklahoma City:
'We are astonished and grieved by this proposed sacrilegious event.'


Archbishop Coakley wrote the following during the run-up to last weekend's blasphemy...

'For more than one billion Catholics worldwide and more than 200,000 Catholics in Oklahoma, the Mass is the most sacred of religious rituals. It is the centre of Catholic worship and celebrates Jesus Christ's redemption of the world by His Death and Resurrection. In particular the Eucharist - which we believe to be the Body, Blood, Soul and Divinity of Jesus Christ - is the source and summit of our faith.

'That's why we're astonished and grieved that the Civic Centre would promote as entertainment and sell tickets for an event that is very transparently a blasphemous mockery of the Mass. The 'Black Mass' that is scheduled for the Civic Centre in September is a satanic inversion and distortion of the most sacred beliefs not only of Catholics, but of all Christians.

I'n a spirit of hope, I ask those who are allowing this event to reconsider whether this is an appropriate use of public space. We trust that community leaders - and, in particular, the board members of the Oklahoma City Civic Centre - do not actually wish to enable or encourage such a flagrantly inflammatory event and can surely remedy this situation.

I'f the event does move forward, we will have to consider other peaceful, prayerful and respectful options to demonstrate our opposition to this publicly supported sacrilegious act.

In the meantime, I call on all Catholics in central and western Oklahoma - as well as all men and women of good will - to pray for a renewed sense of the sacred and, in particular, to pray that the Lord might change the hearts and minds of the organizers of this event.'
Published in Fetzen Fliegen
back to top
Last modified on Wednesday, September 24, 2014
Tweet
More in this category: « In "Full Communion" with the Vatican: The Distorted Face of Catholic Fidelity Defending Pope Francis’ Promotion of Archbishop Blase Cupich »