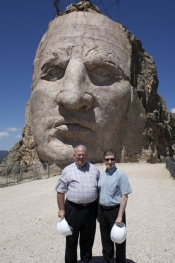 THE THREE CHIEFS -Bishop Lynch, Bishop Cupich and the other guy

The most misunderstood pope in history is again taking heat that is unfair, unjust and just plain unpalatable. I rest my case!

And now everybody’s mad at Bishop of Rome Francis. Well, I for one have had enough of the pope-bashing going on in the wake of the Cupich appointment. What are they objecting to, these self-appointed watchdogs of orthodoxy? What, are they more Catholic than the pope?! Do they think they know better than the Holy Father? Who are they to question his appointments?

Sure, even Vatican veteran journalist John Allen admits that this appointment of Cupich means that “the Francis revolution in Catholicism has finally arrived in the United States.” But I think John Allen may well be a closet traditionalist. And even if he’s not, do we really know for sure that this isn’t a translation error? How do you know that Allen didn’t write his piece in Swahili, and that what we now have is a poor translation? I rest my case.

Sure Cupich, who hails from our neck of the woods here in Minnesota, was consecrated a bishop by Archbishop Harry Flynn of St. Paul and Minneapolis in 1998, and distinguished himself early on in Rapid City, South Dakota as an opponent of the Latin Mass. But this doesn’t mean he’s not a traditionalist.

Yes, he made national headlines back 2002 for prohibiting the celebration of traditional Easter Triduum and even locking the Latin Mass community out of their own church from Holy Thursday until Easter Sunday. So, what? These were probably Rad Trads. I’m sure they were notorious anti-Semites, in which case the good bishop clearly did the right thing. His only mistake was in letting them back in!

Cupich may be infamous for having scandalized pro-lifers back in 2011 when he discouraged his own priests and seminarians in Spokane from praying in front of Planned Parenthood clinics as part of an anti-abortion protest…” but who were those guys to judge Planned Parenthood? This is what the new Franciscan orientation is all about—a kinder, gentler, hope and changer kind of Catholic Christian Community. You wait and see—this strategy is going to work.  I rest my case!

And now the media are hailing Cupich as a liberal. But, clearly, he’s not. I mean, c-mon, it’s the media. I rest my case!

Besides, I know for a fact that Archbishop Cupich does NOT think it’s a good idea to kill babies in their mothers’ wombs. I know it. I’ve read really neat things about how he doesn’t like abortion AT ALL. Seriously! He thinks baby-killing IS WRONG!

HELLO! Obviously Cupich is a traditionalist and this is why Pope Francis appointed him.

Pope Francis has appointed a traditionalist to Chicago. Get over it, liberals!

So, even though I blog for The Remnant I’m calling for my editor to retract a promethean and neopelagian thing written by the self-absorbed Chris Ferrara some years ago about Bishop Blasé. Obviously, The Remnant was hasty with that one. But since a lot of folks aren’t going to know what I’m talking about I’m going to post it again here so that everyone will know what needs retracting.

This from The Remnant back in 2002 is lifted from an article entitled “Pulling the Plug” by Chris Ferrara:

Defending the Regime of Novelty

In the Diocese of Rapid City, SD we find a prime example of this fierce commitment to the decadent and dying Novus Ordo: Bishop Blase Cupich.  Cupich is a living refutation of the neo-Catholic bromide that the younger priests and prelates of the Novus Ordo are going to turn things around, just you wait and see.  Cupich is the youngest bishop in America, if not the world.

Cupich has grudgingly allowed a single “indult” Latin Mass on Sunday in Rapid City, at the Immaculate Conception Church on Fifth Street.  But there he draws the line on all this tradition stuff. Cupich refused to permit the traditional Good Friday and Easter vigil services at Immaculate Conception. To ensure that his edict would be followed, he locked the parishioners out of their own church from Holy Thursday morning until Easter morning.  The Iowa Journal reported that “the members of St. Michael's congregation will gather at 3 p.m. today for Good Friday services on the sidewalk in front of the church.” And so they did.

Cupich, caring and compassionate Novus Ordo shepherd that he is, coldly insists that the Ecclesia Dei indult is only a temporary provision aimed at “mainstreaming” diehard traditionalists into the new liturgy, whether they like it or not, and that Holy Week is as good time as any to begin the process of assimilation into the Novus Ordo: “Eventually, Catholics have to understand that the reform of the Second Vatican Council is, in fact, an improvement and is important to our spiritual life,” said Cupich. Yes, like Winston Smith in George Orwell’s fictional Oceania, Catholics of the postconciliar springtime must learn to understand that two plus two really is five.

Not long ago Cupich was seen breaking the ground for the new “Sioux Spiritual Center” in Rapid City. The news photo shows him in his flowing white Novus Ordo gown, daintily poking a ceremonial shovel into the dirt.  According to the Rapid City Journal of November 9,  2000, the Sioux Spiritual center has been built to serve the Lakota Indian tribe. “When it's complete next spring, the 40-foot diameter, octagon-shaped log building—which will feature a 16-foot high ceiling and windows that face the four directions—will replace an old chapel that's too small to accommodate the many groups that use the center for weekend retreats, educational seminars and lay ministry training programs.”

Bishop Cupich provides a place for the Lakota tribe and “Lakota religious traditions” in his Novus Ordo diocese, but he casts into the street those who wish to adhere to Catholic religious traditions on Holy Thursday and Good Friday.  As Michael Matt would say: “Folks, you couldn’t make this stuff up.” Cupich is the very model of a Novus Ordo bishop. He is the very exemplar of the crisis we must still endure.

Retract this, Mr. Matt. It’s mean! I rest my case.

Published in Fetzen Fliegen
back to top
Last modified on Thursday, September 25, 2014
Tweet
More in this category: « In Reparation for the Black Mass: Gratitude to Archbishop Coakley Reading Francis Through Akin »