“Climbing the ladder of Love?”

Written by  Christopher A. Ferrara
Rate this item
(34 votes) 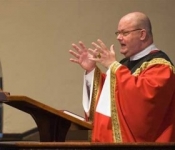 Here is what’s in store for the “conservative Novus Ordo” parish in the midst of what the media are now hailing as “the Francis Revolution.”  It is a sermon by Father Jay Scott Newman, pastor of Saint Mary’s Church in Greenville, SC, considered among the most conservative Novus Ordo parishes in the South. (See October 12, 2014 sermon)

Father Newman (beginning at 12:00) declares that “the same-sex couple, in asking for marriage from our courts, are seeking to make the gift of self to another, a gift that gives meaning to our lives” and that they are “climbing the ladder of love” because they are making a “gift of self, however imperfectly.”   He recommends that as “missionaries” we ask same-sex couples “to climb higher” on this “ladder of love.” To which rung, exactly?

It is interesting to note that this sermon was given the day before the Synod midterm report was published on the Vatican website.  Was Father Newman in the know?

Father Newman—one must presume with the best of intentions—was apparently attempting to integrate into an otherwise perfectly sound sermon the novel contention proposed in the disgraceful midterm report, which the Synod at large refused to adopt: that the Church should focus on the “positive elements” in sodomitical “unions" as well as cohabitation and “second marriages.” According to this “new pastoral approach” all relations formerly regarded as sinful and as grave matter requiring absolution in the confessional would now be regarded as more or less good in an extension of “ecumenism” to morality, producing a “moral ecumenism.” The result in terms of morality would be the same as it has been with religious profession: a slide into indifferentism.

More particularly, to place illicit sexual relations on a “ladder of love” is to say that all such relations are on a path toward the good of true marriage, which is only between a man and a woman, thus abolishing any clear distinction between the one state in which sexual relations are permissible and all the other states in which, as a matter of both revealed truth and natural law, they are gravely sinful. The “ladder of love” metaphor might have a superficial plausibility, but on close examination its implications are disastrous for the Church’s teaching on sexual morality, especially when it comes to the mortal sin of sodomy, whose intrinsic disorder can never under any circumstances be described as an expression of “love.”

Worse still, to rank even sodomitical “unions” on the “ladder of love,” to say in a sermon from a Catholic pulpit that “in asking for marriage from our courts,” homosexuals “are seeking to make the gift of self to another, a gift that gives meaning to our lives” is to consign to oblivion the solemn duty of Catholics to oppose and refuse in any way to countenance legal recognition of “homosexual unions.”

Have we forgotten what the Congregation for the Doctrine of the Faith declared, by order of Pope John Paul II, only eleven years ago? To recall that teaching:

In those situations where homosexual unions have been legally recognized or have been given the legal status and rights belonging to marriage, clear and emphatic opposition is a duty. One must refrain from any kind of formal cooperation in the enactment or application of such gravely unjust laws and, as far as possible, from material cooperation on the level of their application. In this area, everyone can exercise the right to conscientious objection.

“Clear and emphatic opposition” to “homosexual unions” is hardly consistent with declaring that those who seek legal approval of sodomitical relations are “climbing the ladder of love.” On the contrary, they are descending the ladder to hell, objectively speaking. Only nine years ago, even neo-Catholic websites were supporting Cardinal Alfonso López Trujillo, then President of the Pontifical Council for the Family, when he described civil recognition of homosexual “unions” as a “crime which represents the destruction of the world.” To say this is not to “hate” homosexuals, but rather to exercise true caritas out of concern for their eternal welfare. As Cardinal López Trujillo put it: “It is false to say that the Church does not love these people. She loves them and wants to lead them to eternal salvation.”

How, then, did we move in only nine short years from “a crime which represents the destruction of the world” to “climbing the ladder of love” in a sermon delivered by an otherwise doctrinally solid priest? Of course we know the answer: “the Francis effect,” which erupted massively at what John Vennari has rightly called “the psychotic Synod.”

The Psychotic Synod represents the incredible emergence of what must be the final stage in the post-conciliar crisis: what Bishop Athanasius Schneider, speaking of the midterm report, called “a radical neo-pagan ideology” according to which for “the first time in Church history… such a heterodox text was actually published as a document of an official meeting of Catholic bishops under the guidance of a pope, even though the text only had a preliminary character.”

But, as the “homo-heresy”—given a turbo boost at the Psychotic Synod—spreads everywhere, count on defenders of the indefensible such as the indefatigable Mark Shea to continue assuring everyone, including what he admits are his own "panicky readers,” that nothing is amiss. Shea is now reduced to giving the following ludicrous Mark Shea Personal Guarantee® to said panicky readers:  “I repeat: The Pope is not conspiring to destroy the Catholic Church.  The Pope is not heterodox.  The Pope is not our enemy.”

Funny how Shea does not notice the insanity of a situation in which he has to repeat such assurances in the first place.

[Hat tip to a concerned parishioner from Greenville, who found my home phone number and called me to direct me to the audio file, made available for downloading by the general public on the parish website.]

Please help us keep this website free of charge.

Published in Fetzen Fliegen
back to top
Last modified on Tuesday, November 18, 2014
Tweet

More in this category: « “Translating” Cardinal Kasper’s Remarks at Catholic University Argentinian: "If You Try to Understand Francis, You Will Lose Your Reason" »