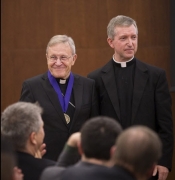 We have heard much talk over the last year and a half about “faulty translations.” For some reason the Vatican’s official website and radio station lost all ability to accurately translate texts as of March 13, 2013. This just so happens to coincide with the election of Pope Francis. Since this point, the Neo-Catholics have implied that we are all incapable of understanding anything Pope Francis or any high-ranking Vatican Prelate has said without their careful and painstaking (re)interpretation.

Well, for once, I am going to offer, as a service to our readers, an accurate translation (and more) of the words of the “pope’s theologian” Cardinal Walter Kasper. In the text below, I have translated, then interpreted, then commented upon, key parts of Cardinal Kasper’s speech at his Catholic University (CUA) award presentation. (Yes, they actually gave him an award!) The quotes below are from a recent news story on Kasper’s speech by the National Catholic Reporter (NCR). I guarantee the following translation and interpretation to be correct as I have many years experience in deciphering the very subtle and intricate language of Modernist doublespeak. Please enjoy this public service.

According to the Baltimore Catechism the Church is the congregation of all those who profess the faith of Christ, partake of the same Sacraments, and are governed by their lawful pastors under one visible head. In the distant past, it would not be surprising if the term “People of God” was used as a simple way of communicating the idea of the exact same people referenced in the catechism definition, in other words, Catholics. The problem is, as Kasper, Francis, and the architects of Vatican II well know, the phrase “People of God” plucked out of historical context and taken by itself, is far more ambiguous than the previous definition. Ironically, the reason that the “People of God” has come to be “viewed with suspicion in the West” is because Vatican II used the phrase while claiming various mysterious ways that heretics, schismatics, and practicioners of false religions are in some form of unity or “partial communion” or extensions of the “People of God.” Thus, the notion of the “People of God” has come to include almost all of humanity as we are told that all are made in the “image and likeness of God.” This, of course, has never been the “ancient understanding” of the Church in any way shape or form. Thus, if you hear the phrase “People of God” today and a red flag does not go up, you have not been paying attention.
NCR: Pope Francis' style is not one of "benevolent popularism," Kasper said.

This is actually a fascinatingly accurate description of Pope Francis’ style.

NCR: "His pastoral style is based on a whole theology.”

I respond to this with Cardinal Kasper’s own previous statement: “he’s not an academic theologian in the professional sense.” Thus, I suspect that a pastoral style based on a theology developed by someone who is not a theologian will be interesting to say the least.

NCR: On the basis of this theology, he's averse to all clericalism. He wants the participation of the People of God in the life of the church. Women as well as men. Laity and clergy, young and old." "He stresses the importance of the sensus fidei, and says the church must open its ears to the people." The Catholic church must not be self-centered, Kasper said, but instead a church "on the move." And a church that is an "open house," a church of the open God, "presupposes renewal and reform," he said.

This is good to hear! Based on this news, I look forward to the Holy Father eliminating the iron-fisted clericalism being doled out upon the Franciscan Frias of the Immaculate by Fr. Volpi. I also look forward to his freeing the Franciscan Sisters of the Immaculate from their baseless investigation so as to allow more women to “participate in the life of the Church.” In addition, I look forward to Pope Francis truly making the Church an “open house” and a “church of the open God” by releasing the Society of St. Pius X from all legalistic and overbearing clerical censures so that they may more fully assist in the necessary “renewal and reform” of the Church. I also look forward to the Pope listening to the sensus fidei, and opening his ears to the voice of the people by reading the Remnant’s “Stop the Synod!” online petition. This will be a first step so that the “church on the move” can disregard the calls of “self-centered” Cardinals to keep “progressing” towards perdition, and instead move us home to Tradition, our only remedy!

Published in Fetzen Fliegen
back to top
Last modified on Friday, November 14, 2014
Tweet

More in this category: « Fr. Michael Rodriguez and "The Papist Priest" “Climbing the ladder of Love?” »