Written by  Christopher A. Ferrara
Rate this item
(62 votes) 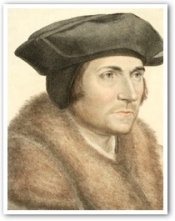 In his Responsio ad Lutherum, St. Thomas More called Luther an "ape", a "drunkard", and a "lousy little friar". But who was he to judge?

The Vatican has announced another milestone in neo-Catholicism: a joyous Commemoration of the Reformation in 2017! The Pontifical Council for Promoting Christian Unity proclaims the surprising development that makes this very special commemoration possible:

Catholics and Lutherans realize that they and the communities in which they live out their faith belong to the one body of Christ. The awareness is dawning on Lutherans and Catholics that the struggle of the sixteenth century is over. The reasons for mutually condemning each other’s faith have fallen by the wayside.

Yes, the awareness is dawning: Catholics and Lutherans are one after all! And since this great good news comes to us from a Pontifical Council, we ought not to protest it because, as the neo-Catholics so rightly insist, there must be no public criticism of the Pope. Ever. Under any circumstances.

Yet reactionary, radical traditionalist, self-absorbed, neo-Pelagian counters of Rosaries may still cavil that it seems impossible for Catholics to belong to “the one body of Christ” with Lutherans who reject dogmas of the Faith, the existence of seven sacraments, the sacrificial priesthood, and the divine institution of the papacy, while approving divorce and remarriage, contraception, abortion—but only when there are “sound reasons for ending a pregnancy”—and the “ordination” of women and actively homosexual “gay” ministers. Indeed, the Vatican document even bears the name of “Rev. Wanda” from Brazil.

But not to worry! The Vatican has suspended the operation of the principle of non-contradiction for ecumenical purposes. As the document explains:

As members of one body, Catholics and Lutherans remember together the events of the Reformation that led to the reality that thereafter they lived in divided communities even though they still belonged to one body. That is an impossible possibility and the source of great pain.

Problem solved: Catholics and Lutherans belong to “the one body of Christ” by an impossible possibility. Who knew!

But, no doubt, the reactionary, radical traditionalist, self-absorbed, neo-Pelagian counters of Rosaries will point to the anathemas attached to Luther’s errors by the supposedly “infallible” Council of Trent, as approved by Pope Saint Pius V, and the earlier condemnation of forty-one Lutheran propositions by Pope Leo X in Exsurge Domine (1520).

Tut, tut, tut. That was then, and this, my friend, is now! As the Pontifical Council for Promoting Christian Disunity—I mean Unity—explains, with appropriately contemptuous quotation marks:

Meanwhile, in Rome, the process against Luther continued and, eventually, Pope Leo X decided to act. To fulfill his “pastoral office,” Pope Leo X felt obliged to protect the “orthodox faith” from those who “twist and adulterate the Scriptures” so that they are “no longer the Gospel of Christ.” Thus the pope issued the bull which condemned forty-one propositions drawn from various publications by Luther. Although they can all be found in Luther’s writings and are quoted correctly, they are taken out of their respective contexts.

So it seems that dastardly Pope Leo X did Luther a grave injustice by quoting him out of context.   But what of the Tridentine anathemas approved by Saint Pius V? Well, even saints can make mistakes, as the coming canonizations of John XXIII and John Paul II will demonstrate resoundingly. As the Pontifical Council explains, the Tridentine anathemas were a polemical excess, an unfortunate tit-for-tat with Protestants, uttered in the heat of the moment:

Because the doctrinal decrees of the Council were largely in response to what it perceived to be Protestant errors, it shaped a polemical environment between Protestants and Catholics that tended to define Catholicism over and against Protestantism. In this approach, it mirrored many of the Lutheran confessional writings, which also defined Lutheran positions by opposition. The decisions of the Council of Trent laid the basis for the formation of Catholic identity up to the Second Vatican Council.

But, of course, the Super Council That Changed Everything Forever has superseded the polemical excesses of Trent, whose embarrassing fulminations can now be safely abandoned despite the exaggerated claims of their infallibility. Quoth the Pontifical Council:

While the Council of Trent largely defined Catholic relations with Lutherans for several centuries, its legacy must now be viewed through the lens of the actions of the Second Vatican Council (1962–1965). This Council made it possible for the Catholic Church to enter the ecumenical movement and leave behind the charged polemic atmosphere of the post-Reformation era.

But wait. Those same reactionary, radical traditionalist, self-absorbed, neo-Pelagian counters of Rosaries might object that a document published by the “Pontifical Council for Christian Unity” has no doctrinal value. Nonsense. This is the epoch of The Great Façade in which non-doctrine is doctrine, while actual doctrine is forgotten. So, on with the commemoration of the Reformation! It’s just another day in neo-Catholic land.

Published in Fetzen Fliegen
back to top
Last modified on Wednesday, April 9, 2014
Tweet

More in this category: « Pope Francis: Heretics Can Be Saints? Fr. Paul Nicholson: “+Marcel Didn’t Care About the Holy Mass” »