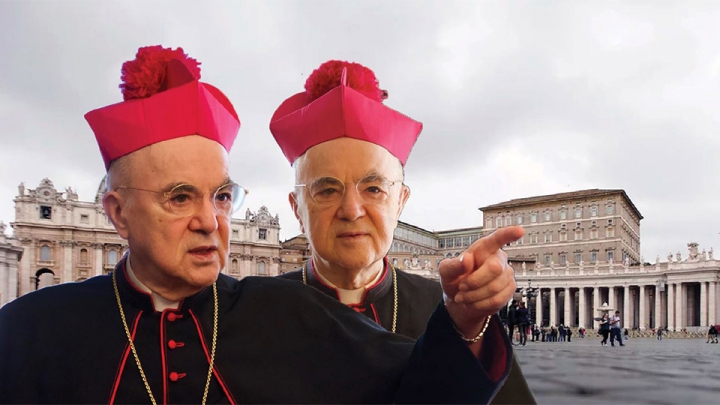 Dear friends,  after Archbishop Carlo Maria Viganò was accused of having a double, I did a series of investigations, and today I am able to share with all of you this exclusive interview. I found Viganò 2, the alter ego of Viganò 1, and here is the conversation that we had.

Good morning, so you are Viganò 2…

It’s a pleasure to meet you.

The pleasure is all mine.

May I ask you what kind of connections you have with Viganò 1?

Can you say something more?

Viganò 1 is a sweet man, and he tends to be, how shall we say it, a bit too tender, while I am somewhat more determined.

I understand. But when do you take the field?

It must be hard work…

And how did you start collaborating?

Well, when Viganò 1 was nuncio to the United States I slipped under his cassock and went around in his place. Gestures, handshakes. You know, in diplomacy all this has a certain importance.

Then I began speaking in place of Viganò 1. He would move his mouth, but the words were mine. We reached a good understanding.

The same thing would happen when Viganò 1 was in the Vatican. I was always under his cassock. For example, if there were accounts at the Governorate that did not balance of if the numbers were suspicious, I was the one who made the calculations and then I called the managers…

And I took the necessary actions.

Oh, he would say: just let it be, what do you hope to accomplish…But I refused to budge. I am made that way.

And now, it’s the same. When there is an article to write or a speech to give or an interview to grant, I enter the scene. So to speak, obviously, because I am always behind the scenes and let him be the one who appears.

I understand. And you are always in agreement?

Oh, at times Viganò 1 says to me: “But you are decidedly too Catholic!” But then he lets me do it.

And what is the hardest part of your job?

Well, when Viganò 1 makes a long video, it is not easy to stay under his cassock, sometimes for more than an hour, and speak in sync with him as he moves his mouth. But with good practice…

Listen, don’t you ever want to take the limelight?

No. I am good like this, in the shadows.

And how does Viganò 1 handle it?

Oh, as I was saying, he is very good, always kind. He lets it go. He comes to me and says: “Hey, there’s going to be this speech, or this article, or this book…” And I set to work.

What exactly are the ideas of Viganò 1?

He does not have ideas. He leaves that to me.

So he gives you carte blanche, so to speak?...

And there have never been difficult moments, misunderstandings…

Misunderstandings no, but some technical problems, yes. When Viganò 1 was nuncio in the United States, at the beginning it was not easy. I had to speak in English. And so, underneath his cassock, I also had to translate. But little by little I became very quick at it.

I understand. But tell me, how long has this relationship been going on?

Oh, for many years now. Viganò 1 was still a little boy when one day he invented an imaginary friend. Shortly after that, I entered the scene.

Good, calm. He liked to play at figurines. I recall that his set was full of…doubles.

And, listen, what about the famous meeting with Pope Francis…

When Pope Francis asked us about McCarrick?

It was a special moment. Since he doesn’t have ideas, Viganò 1 didn’t know what to think. I was the one who explained it to him that the pope was behaving strangely.

So you were there.

Of course I was, like I always am, under his cassock. I listened to the pope and I said to Viganò 1: “Be careful, there’s something fishy about this.”

And what did Viganò 1 think?

As I said, he is a good man. But I was suspicious, so I took the initiative, and that is how the famous Memorandum was born.

And what are your relations like with other bishops, with the cardinals?...

If it was just Viganò 1, things would be great. He lets things go, allows things to be said. I am always the one who puts him on alert: “Look at how that one is not telling it right; look at how there is apostasy there…”

But do you mean then that even when we collaborated for the book “Nell’ora della prova” it was actually you, Viganò 2, who was writing? …

Well, my compliments! I never noticed anything!

That’s the goal: that no one notices anything.

And what are your plans together now?

In reality, we live a bit day-by-day. Of course, in this heat…

What are you trying to say?

I am saying: with this heat, being under Viganò 1’s cassock isn’t always easy, but it’s my mission, and I want to carry it out in the best possible way.

You do it honorably.

But don’t you both ever get to take a break?

Yes, we like to watch some good films together.

And what are your favorites?

And your favorite book?

The Double, by Dostoyevsky. But also The Secret Sharer by Joseph Conrad, The Dark Half by Stephen King, and The Double by José Saramago. And naturally…

One, No One, and A Hundred Thousand by Luigi Pirandello.

Interesting. Would you like to say something in conclusion?

I would like to say that we, Viganò 1 and Viganò 2, are only one thing, so no one may think of dividing us.

Very well. Thank you again. Give my greetings to Viganò 1. In fact, may I ask where he is and what he is doing?

Oh, he goes for walks.

He goes for walks?

Yes, he likes to walk. He says: “It helps me not to think too much.”  Which does him good, I have to say.

At any rate, you are there to think for him …

I am glad to hear you say that. But now, excuse me, I have to leave you. I have to write a rather demanding article in the name of and on behalf of Viganò 1. And then we have an experiment in progress…

Really? What sort of experiment?

Incredible! And how is it going?

We are working on it, but I can’t say more.

Thank you again for this interview. I would have to say that … it’s worth double!

Thank you as well.

First published at Duc in altum

[Comment Guidelines - Click to view]
The Remnant values the comments and input of our visitors. It’s no secret, however, that trolls exist, and trolls can do a lot of damage to a brand. Therefore, our comments are heavily monitored 24/7 by Remnant moderators around the country.  They have been instructed to remove demeaning, hostile, needlessly combative, racist, Christophobic comments, and streams not related to the storyline. Multiple comments from one person under a story are also discouraged. Capitalized sentences or comments will be removed (Internet shouting).
The Remnant comments sections are not designed for frequent personal blogging, on-going debates or theological or other disputes between commenters. Please understand that we pay our writers to defend The Remnant’s editorial positions. We thus acknowledge no moral obligation whatsoever to allow anyone and everyone to try to undermine our editorial policy and create a general nuisance on our website.  Therefore, Remnant moderators reserve the right to edit or remove comments, and comments do not necessarily represent the views of The Remnant.
back to top
Last modified on Friday, June 25, 2021
Tweet
More in this category: « Booked and Cooked: The State of Police in America DR. JOHN RAO: The troubles of a "Golden Age" »