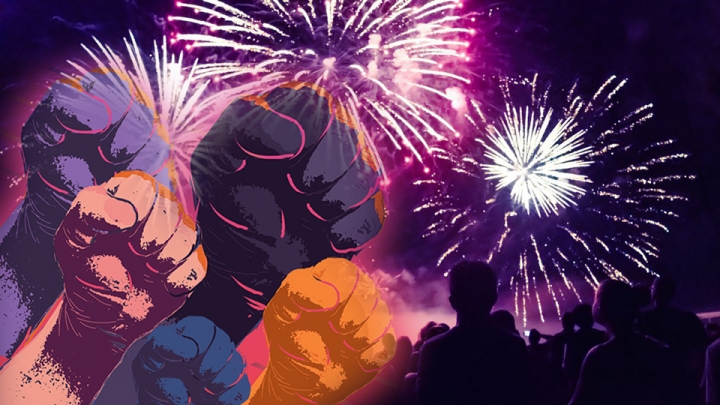 As the Constitutional Convention in Philadelphia concluded on September 17, 1787, Benjamin Franklin was asked what kind of government do we have? “A Republic,” he replied, “if you can keep it.”

Stripped to its essence as the nation attempts to celebrate its 245th birthday, Franklin’s challenge needs examination and any newspaper will do.

The nation’s president says: “America is back”— back to the 1970s with increased inflationary spending, high gas and food prices and compounded global threats. Not to be outdone, he also claims the Constitution does not protect our right to own “assault weapons” because “if you wanted, or if you think you need to have weapons to take on the government, you need F-15s and maybe some nuclear weapons.”

Welcome to July 4, 2021, where courage is a boy declaring himself a girl and athletically competing against them.

Sen. Dick Durbin’s remarks on the Equality Act was equally as telling. “Catholic” Durbin ran counter to the church’s disapproval to the legislation as it discriminates against Christians and the unborn.  Durbin quantified, “I do believe that people who want to blatantly discriminate and use religion as their weapon have gone too far. We have to have limits on what they can do. I might remind us in history that the Ku Klux Klan was not burning question marks.”

Equating those who adhere to biblical morality with the KKK does not bode well for any reasoned debate about religious freedoms in the future and those arguments are forthcoming.

Welcome to July 4, 2021, where courage is a boy declaring himself a girl and athletically competing against them.  It is a place where the Internal Revenue Service denied a Christian nonprofit tax-exempt status because the Bible’s “teachings are typically affiliated with the Republican Party.” This disqualifies them from exemption under Section 501(c)(3), according to the Washington Examiner.

Do not expect to keep your job at Space Force if you criticize the evils of Marxism, or post on Facebook how the COVID vaccine made you sick.

Don’t dare joke about Newark, New Jersey, that erected a 700-pound bronze statue of George Floyd, nor may you utter, “all lives matter.”  Do not expect to keep your job at Space Force if you criticize the evils of Marxism, or post on Facebook how the COVID vaccine made you sick.

A transgender BMX bike rider who qualified as an alternate for the U.S. at the Tokyo summer Olympics said her goal was to win an Olympic medal “so I can burn a U.S. flag on the podium.”  In a spirited nation, she would be immediately nixed from the team.  Yet, certain folks will lionize her.

Some police departments have stood by as looting and burning goes unabated and where statues of Columbus and Lincoln are toppled, while the law is applied asymmetrically on the basis of ideology and race.

Technology tycoons exploit the cult of woke to attack those who have dissenting views including a former president.  In Biden’s America, the Federal Reserve is now telling employees to avoid “biased terms like Founding Fathers.”

Governors and mayors have used a virus to deny constitutional freedoms of assembly, religion and speech.  Society can be juxtaposed to the condition of that Miami condominium before its collapse. Cracks in our moral and spiritual foundations threaten our future.

We have abandoned the concepts of a republic for a democracy.

The Constitution’s framers were adamantly against tyranny of the majority.  The Founders framed a representative republic that Franklin’s famous quote underscored with designated checks-and-balances.

Over two centuries ago, English historian Alexander Tytler believed, “A democracy cannot exist as a permanent form of government. It can only exist until the majority discovers it can vote itself largess out of the public treasury.”  The Wall Street Journal reports nearly half the nation is now on the federal dole.

If you believe America is humanity’s noblest construct of nation and spirit, the moment to stand up and be counted is upon us.

Doing nothing will only accelerate the deep-seated conversion from a constitutional republic into a one-party socialist government.

What better time to step-up than the nation’s birthday.

[Comment Guidelines - Click to view]
The Remnant values the comments and input of our visitors. It’s no secret, however, that trolls exist, and trolls can do a lot of damage to a brand. Therefore, our comments are heavily monitored 24/7 by Remnant moderators around the country.  They have been instructed to remove demeaning, hostile, needlessly combative, racist, Christophobic comments, and streams not related to the storyline. Multiple comments from one person under a story are also discouraged. Capitalized sentences or comments will be removed (Internet shouting).
The Remnant comments sections are not designed for frequent personal blogging, on-going debates or theological or other disputes between commenters. Please understand that we pay our writers to defend The Remnant’s editorial positions. We thus acknowledge no moral obligation whatsoever to allow anyone and everyone to try to undermine our editorial policy and create a general nuisance on our website.  Therefore, Remnant moderators reserve the right to edit or remove comments, and comments do not necessarily represent the views of The Remnant.
back to top
Last modified on Saturday, July 3, 2021
Tweet

More in this category: « DR. JOHN RAO: The troubles of a "Golden Age" The Good War: Airborne Policing in Oxford, Mississippi, 1962 »