CHURCH IN CHRISIS: World's Catholics Resist Francis to His Face 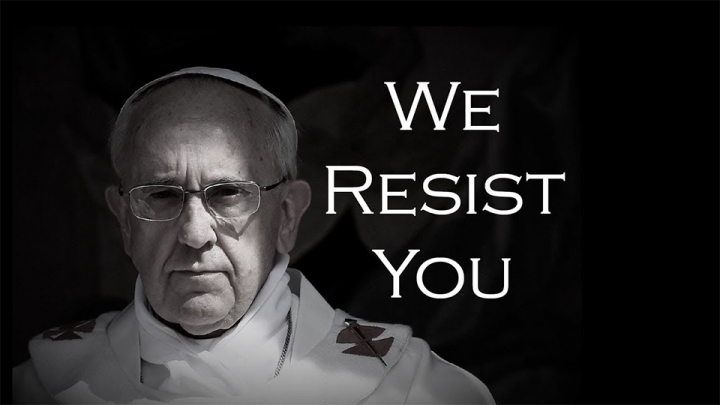 The Synod that is now underway in the Vatican will be another attack on the traditions of the Catholic Church as handed down to us from apostolic times. Francis is a ruthless idealogue whose agenda is all about permanently changing the Church so that it can never be changed back. His arrogance and hubris evidently know no limits. And he is hellbent on doing to the Catholic Church what Biden and his Globalist handlers are doing to the United States of America – dismantle it brick by brick and piece by piece until it is no more.

The good news is that while Biden and the Great Resetters may succeed where America is concerned, Francis never shall. The Church was founded by Jesus Christ Himself, and while He may use little men such as Francis to chastise His wayward children, in the end God will save His Church and Francis will be a forgotten footnote of history.

So as this new Synod is spawned, let us pray for God’s intervention as we vow to resist Francis to his face exactly as we did during the last blasphemous Synod conducted by Francis two years ago which, I believe, is directly responsible for the  chastisement we’ve been living through ever since.

The thoughts expressed in this video (below) are as applicable today as they were when they were written in Rome during the Amazon Synod, which is why I urge you to share it, to pray for the conversion of Francis and to spread the word that faithful Catholics have no choice but to stand against the current occupant of the Chair of St. Peter until he returns to the Faith of our Fathers.

[Comment Guidelines - Click to view]
The Remnant values the comments and input of our visitors. It’s no secret, however, that trolls exist, and trolls can do a lot of damage to a brand. Therefore, our comments are heavily monitored 24/7 by Remnant moderators around the country.  They have been instructed to remove demeaning, hostile, needlessly combative, racist, Christophobic comments, and streams not related to the storyline. Multiple comments from one person under a story are also discouraged. Capitalized sentences or comments will be removed (Internet shouting).
The Remnant comments sections are not designed for frequent personal blogging, on-going debates or theological or other disputes between commenters. Please understand that we pay our writers to defend The Remnant’s editorial positions. We thus acknowledge no moral obligation whatsoever to allow anyone and everyone to try to undermine our editorial policy and create a general nuisance on our website.  Therefore, Remnant moderators reserve the right to edit or remove comments, and comments do not necessarily represent the views of The Remnant.
back to top
Last modified on Tuesday, October 12, 2021
Tweet

More in this category: « ARCHBISHOP VIGANO: Statement in Defense of Convents of Religious Sisters of Contemplative Life Big Brother Banking »