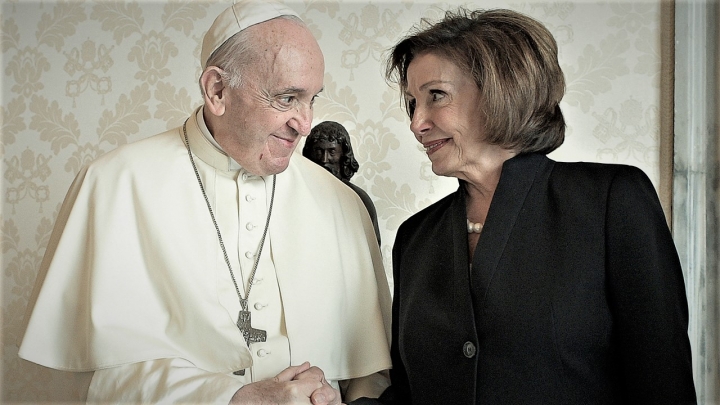 During his weekly audience on November 3rd, the Holy Father emphasized that fraternal correction must always be guided by love.

“The supreme rule regarding fraternal correction is love: to want the good of our brothers and sisters,” the pope said.

He’s right. Christians should correct others “in a spirit of gentleness.” Though it’s incumbent upon me to point out that Francis himself has a track record of being less than gentle when it comes to fraternal correction. It’s pretty safe to say that until the Bergoglio papacy nobody could say they had been called a bitch by a pope.

I suspect the Holy Father is taking a bit more heat than he expected as a result of his recent visits with Speaker Pelosi and President Biden.

In the weeks leading up to and pretty much every week after the publication of Traditionis Custodes, the Holy Father has used his Wednesday audiences to launch passive aggressive jabs at traditional Catholics. The audience of November 3rd certainly had those jabs peppered in, though Francis crooned them to a slightly different tune.

Get out your leather jackets and poodle skirts, folks. From the people who brought you the Pachamama Papa, the St. Gallen Mafia proudly presents … Frankie and Lavenders!

The song tells the story of a rebel-rousing student who despises the traditional manner by which students were expected to conduct themselves. Without fail, every time he’s caught breaking the rules he responds with the same line: “Why’s everybody always pickin’ on me?”

Dare I say that the Holy Father’s decision to change the tune and discuss the need for loving fraternal correction might stem from the criticism he’s received from his most recent photo ops?

While the treehouse friends: Biden, Pelosi, and the pope all seemed to enjoy their papal play dates, the photos left Catholics — not just traditional Catholics, very confused.

I suspect the Holy Father is taking a bit more heat than he expected as a result of his recent visits with Speaker Pelosi and President Biden. A photo released by the Vatican showed Francis and Pelosi engaged in some sort of “power handshake” and bizarre eye contact. In another photo, we saw the pope and President Biden laughing it up at what we’re told was likely one of Biden’s hysterical one-liners.

Ha! That one just never gets old.

While the treehouse friends: Biden, Pelosi, and the pope all seemed to enjoy their papal play dates, the photos left Catholics — not just traditional Catholics, very confused. Whether or not the Holy Father told President Biden he should continue receiving communion was irrelevant to most of the faithful. It didn’t slip the minds of most Catholics that both Pelosi and Biden are Catholic, and Pope Francis is their Holy FATHER. As such, many were left scratching their heads wondering why Pope Francis didn’t seem to offer any sort of fraternal correction regarding the position both the Speaker of the House and the President take regarding the right to life.

As for Frankie, well he was left scratching his head wondering why there was such a party pooper reaction to his sock up. He crunched the numbers and it seemed like the kids across the pond would dig seeing him with the oldies.

When it comes to politics, U.S. Catholics are split down the middle. Around half of Catholic registered voters (48%) describe themselves as Republicans, while roughly the same share (47%) identify with the Democratic Party. In 2016, 52% of Catholics backed Republican Donald Trump. However, Catholics chose Barack Obama over John McCain in 2008 by a margin of 54% to 45%.

Apparently, roughly half of the Catholic voters in the United States didn’t get Father Altman's memo that you can’t be both a Catholic and a Democrat.

Thus, the less than hip reaction he received for his meetings with Biden and Pelosi left Frankie to wonder, “Why’s everybody always pickin on me?”

Pope Francis has come to expect such a reaction from Traditional Catholics. He knows we have a beef with him and frankly, he doesn’t care. If he can ignore the dispatch by the Dubia Cardinals, then surely blowing us common folk off must be a piece of cake. However, when you look at the numbers, the harsh reactions he received from U.S. Catholics would come as a surprise to anybody.

As I mentioned, the pontiff has a more than favorably rating among the American faithful. In fact, two-thirds of them don’t even know about Traditionis Custodes and it’s no secret that 70% of U.S. Catholics see the Blessed Sacrament as a symbol, not a sacrament. And then there’s the “Synod of Synodality,” an effort to replace the Church of God with the Church of man — and U.S. Catholics seem to have taken the bait: hook, line, and sinker.

And so it happens that we find ourselves at November 3rd and a pontiff licking his wounds from criticism that came out of left field and hit him like a ton of bricks.

Isaiah (43:18-19) teaches us that when God closes a door, he opens a window. It’s safe to say that Pope Francis closed the door when he issued Traditionis Custodes. And while it went unnoticed by most Catholics in the United States, perhaps the pontiff’s latest photo op with Pelosi and Biden was God’s way of opening a window to provide mainstream Catholics with the clear view of Pope Francis that traditional Catholics have seen all along.

When he opened the Second Vatican Council, Pope John XXII said it was time to "open the windows and let in the fresh air." The Church has gone through a lot in the last half century. Over the years that “fresh air” has turned into the stench of ecumenism, globalism, and secularism.

Scripture also tells us that the Lord can do amazing things with faith the size of a mustard seed.

For me, that mustard seed came in the form of the pope’s recent photo ops and his subsequent November 3rd lament. It may be wishful thinking, but while the door on tradition might be closed for now, God always prevails. He’s given the mainstream Church an opportunity by opening the window on the Francis Pontificate.

It’s my hope through that window, the breath of the Holy Spirit will open the minds of the faithful so that we can begin the process of restoring all things in Christ. That effort starts with us not only praying for, but offering fraternal correction and outright resistance to the pope seems free to dismantle the Church brick-by-brick.

Sooner or later, as the song goes, “He’s gonna get caught, just you wait and see.”

Jeremy Dannebohm is a freelance writer and traditional Catholic. All too acquainted with controversy and attacks, Dannebohm is quick to defend those disenfranchised by the post-conciliar Church. He resides in the Carolinas.

[Comment Guidelines - Click to view]
The Remnant values the comments and input of our visitors. It’s no secret, however, that trolls exist, and trolls can do a lot of damage to a brand. Therefore, our comments are heavily monitored 24/7 by Remnant moderators around the country.  They have been instructed to remove demeaning, hostile, needlessly combative, racist, Christophobic comments, and streams not related to the storyline. Multiple comments from one person under a story are also discouraged. Capitalized sentences or comments will be removed (Internet shouting).
The Remnant comments sections are not designed for frequent personal blogging, on-going debates or theological or other disputes between commenters. Please understand that we pay our writers to defend The Remnant’s editorial positions. We thus acknowledge no moral obligation whatsoever to allow anyone and everyone to try to undermine our editorial policy and create a general nuisance on our website.  Therefore, Remnant moderators reserve the right to edit or remove comments, and comments do not necessarily represent the views of The Remnant.
back to top
Last modified on Tuesday, November 9, 2021
Tweet
More in this category: « A Veteran Affair Michael Matt Recorded LIVE in Platteville, WI »