Vatican II in Light of Tradition? 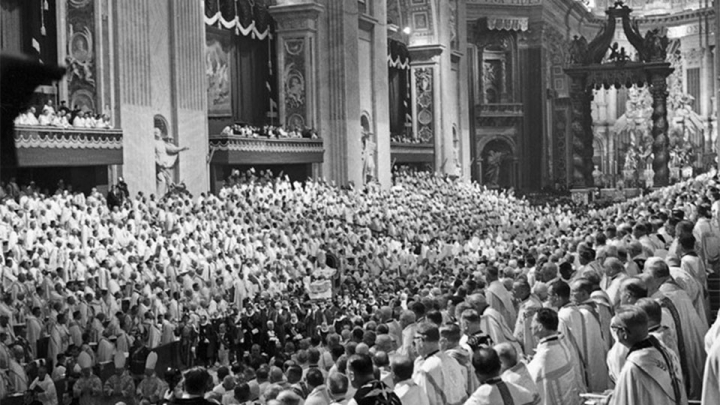 Traditional Catholics are often told that we ought not to reject the Second Vatican Council, but merely reject the “Spirit of Vatican II,” which is showcased by clown masses, communion in the hand, Fr. James Martin, SJ, etc. In other words, reject the implementation of the council, but don’t reject the council itself. People will quote bits and pieces from the council that can sound more conservative, and try giving the impression that Vatican II isn’t so bad after all. This is known as reading Vatican II in light of tradition, or using the hermeneutic of continuity.

When I first inched closer to tradition, this seemed to be appealing. It was intimidating to reject a council, but every honest Catholic can see the problems that have arisen in the last sixty years. There was a false spirit of Vatican I, so surely there could also be a false spirit of this council. This allowed me to maintain traditional practices and beliefs while not being branded as rejecting Vatican II. As I read more and more into the background of the council, however, I quickly found this to be an untenable position.

I could read a lot of Vatican II in a conservative way if I close one eye, squint the other, tilt my head sideways, and look in the other direction.

For example, some people attribute the doctrine of invincible ignorance to Vatican II, but in reality, this is a traditional teaching of the Church. Our Lord Himself said of sinners “If I had not come, and spoken to them, they would not have sin; but now they have no excuse for their sin,” (John 15:22, Douay-Rheims). One might then use this to justify Vatican II’s proclamation that “the Spirit of Christ has not refrained from using them (schismatic churches) as means of salvation.” However, I could read a lot of Vatican II in a conservative way if I close one eye, squint the other, tilt my head sideways, and look in the other direction. The fact is that schismatic churches are roadblocks to salvation, and in the rare instance that someone is saved while in one, it is due to the Catholic elements there, not because of the sect itself.

Webster defines “in light of” as “from the point of view of.” So if you are going to read Vatican II in light of tradition, that means tradition will be used to judge the council. It does not mean that you reinterpret things to sound more traditional. Even if a certain line here or there can sound traditional, it is not because the council is trying to implement Catholic tradition. Rather, it is there merely to prevent suspicion of modernism.

Pope Francis has drawn the line with followers of the hermeneutic of continuity, saying "if you do not follow the council or you interpret it in your own way, as you wish, you are not with the church."

Edward Schillebeeckx, one of the primary theologians of the council, said “We have used ambiguous phrases during the Council and we know how we will interpret them afterwards.” Annibale Bugnini, the mind behind the liturgical reforms (and a suspected Freemason), said to “let many things be said in embryo and in this way let the door remain open to legitimate and possible postconciliar deductions and applications: let nothing be said that suggests excessive novelty and might invalidate all the rest.” In other words, the only reason there isn’t more flat-out modernism in the council is because that would’ve led to fewer documents passing. By interpreting the council in a conservative way, you are lulling yourself to sleep while the authorities implement the council in a liberal way, just as they planned.

Pope Francis has drawn the line with followers of the hermeneutic of continuity, saying "if you do not follow the council or you interpret it in your own way, as you wish, you are not with the church." I don’t think anyone would deny that Francis seeks to implement the council in a modernist way. It is therefore clear that he considers both the rejection of the council and the hermeneutic of continuity to be “not with the church,” meaning not Catholic. Even though His Holiness thinks that trads and literally everyone else will still go to Heaven, we see that we must choose Vatican II or tradition, but not both. The light of tradition exposes the council for what it really is: a modernist revolution.

We know that the goal of Vatican II was to implement novelty in the Church.

We know that the goal of Vatican II was to implement novelty in the Church, and it was intentionally ambiguous where this was not apparent. Therefore, we cannot accept it, even if some parts of it sound nice. The “good parts” of Vatican II are things we should’ve known anyways. Unlike the spirit of Vatican I, this council’s spirit is perfectly in line with what those behind it wanted. Saying that the council simply needs to be implemented properly is like saying that real communism works, it just hasn’t been tried yet.

[Comment Guidelines - Click to view]
The Remnant values the comments and input of our visitors. It’s no secret, however, that trolls exist, and trolls can do a lot of damage to a brand. Therefore, our comments are heavily monitored 24/7 by Remnant moderators around the country.  They have been instructed to remove demeaning, hostile, needlessly combative, racist, Christophobic comments, and streams not related to the storyline. Multiple comments from one person under a story are also discouraged. Capitalized sentences or comments will be removed (Internet shouting).
The Remnant comments sections are not designed for frequent personal blogging, on-going debates or theological or other disputes between commenters. Please understand that we pay our writers to defend The Remnant’s editorial positions. We thus acknowledge no moral obligation whatsoever to allow anyone and everyone to try to undermine our editorial policy and create a general nuisance on our website.  Therefore, Remnant moderators reserve the right to edit or remove comments, and comments do not necessarily represent the views of The Remnant.
back to top
Last modified on Friday, January 21, 2022
Tweet
More in this category: « Back to the 70’s: What if All Traditional Priests are Suspended? (Part I) Rubber Stamping a Thinning Herd »