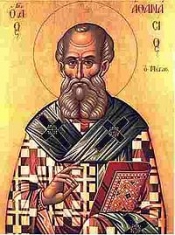 Today is the Traditional Feast Day of St. Athanasius, Bishop, Confessor, and Doctor of the Church. Although he lived nearly 1700 years ago, St. Athanasius’ example is very relevant for Catholics in our day. St. Athanasius lived in a time of severe crisis for the Church; a time when the vast majority of Churchmen and faithful followed the novel teaching of Arius, against the teaching of Tradition.

It was a time where bishops and priests “in full Communion” with the Catholic Church, not suspended or censured in any way, ran Catholic dioceses and parishes. They taught and preached Arianism from their sees and their pulpits. Catholics faithful to Tradition, led by St. Athanasius, were repeatedly banished and exiled from the “official” churches by these men and rebuked as disobedient schismatics.

The pope at the time, Liberius, failed to take any effective action to rid the Church of this doctrinal novelty or its adherents. The secular world at the time favored Arianism, including the temporal authority, and so condemning it would have been unpopular. Under pressure from the Emperor, Pope Liberius not only excommunicated St. Athanasius but also signed an ambiguous “creed” allowing the novel teaching to gain an air of credibility by not specifically excluding or condemning it.

These tragic actions of Pope Liberius are so upsetting to Neo-Catholics that some of their apologists have even attempted to claim they never occurred. Nevertheless, numerous credible Catholic sources confirm the acts are historical fact, including Butler’s Lives of the Saints and Cardinal John Henry Newman.

Other Neo-Catholic apologists resort to deception and spin to assimilate the event into their own paradigm. They try to transform St. Athanasius into a Neo-Catholic hero by imputing to him and all Catholics of the 300’s the knowledge we now have that Arianism is clearly heretical and that all support of it is clearly erroneous. Yet this was in no way the situation during the time which St. Athanasius lived.

St. Athanasius and Catholic laity in this era were surrounded in every direction by the temporal and Church authority pressuring them to “obey” a novel teaching which had every single outward trapping of approval by the human element of the Catholic Church. Ironically, if the faithful of that time had listened to present day Neo-Catholic advice they would have reported dutifully to their Arian-run parish, submitted fully to their Arian bishop, and would have had nothing to do with the excommunicated and “schismatic” “rebel” bishop, Athanasius.

The only thing St. Athanasius and these faithful had to tell them that all their senses were wrong was the Traditional Faith the Church had passed down to them from the Apostles. In this context we can see the true courage and conviction it must have taken for these men and women to be derided, slandered, exiled, and humiliated by those in the “official Church” yet still stick unwaveringly to what they knew to be true.

It was not until many years later that these brave Catholics were proven to be right and vindicated by the Church. For the vast majority, the vindication came long after their death. Thus for any of us to now say that the path these faithful chose in the 300’s was “obvious” or that they were clearly on the side of the “official Church” at the time is a dishonor to both their courage and faith.

Driven out of their own parish churches, having been called schismatic, heretical, and disobedient, some of the faithful started to lose heart, to despair, and even to doubt if they were on the right path. The great St. Athanasius offered the following words of encouragement to those faithful, which remain as true today as they were in his time:

May God comfort you. I know moreover that not only this thing saddens you, but also the fact that while others have obtained the churches by violence, you are meanwhile cast out from your places. For they hold the places, but you the Apostolic Faith. They are, it is true, in the places, but outside of the true Faith; while you are outside the places indeed, but the Faith, within you. Let us consider whether is the greater, the place or the Faith. Clearly the true Faith. Who then has lost more, or who possesses more? He who holds the place, or he who holds the Faith? Good indeed is the place, when the Apostolic Faith is preached there, holy is it if the Holy One dwell there. (After a little:) But ye are blessed, who by faith are in the Church, dwell upon the foundations of the faith, and have full satisfaction, even the highest degree of faith which remains among you unshaken. For it has come down to you from Apostolic tradition, and frequently has accursed envy wished to unsettle it, but has not been able. On the contrary, they have rather been cut off by their attempts to do so. For this is it that is written, ‘Thou art the Son of the Living God,’ Peter confessing it by revelation of the Father, and being told, ‘Blessed art thou Simon Barjona, for flesh and blood did not reveal it to thee,’ but ‘My Father Who is in heaven,’ and the rest. No one therefore will ever prevail against your Faith, most beloved brethren. For if ever God shall give back the churches (for we think He will) yet without such restoration of the churches the Faith is sufficient for us. And lest, speaking without the Scriptures, I should [seem to] speak too strongly, it is well to bring you to the testimony of Scriptures, for recollect that the Temple indeed was at Jerusalem; the Temple was not deserted, aliens had invaded it, whence also the Temple being at Jerusalem, those exiles went down to Babylon by the judgment of God, who was proving, or rather correcting them; while manifesting to them in their ignorance punishment [by means] of blood-thirsty enemies. And aliens indeed had held the Place, but knew not the Lord of the Place, while in that He neither gave answer nor spoke, they were deserted by the truth. What profit then is the Place to them?

For behold they that hold the Place are charged by them that love God with making it a den of thieves, and with madly making the Holy Place a house of merchandise, and a house of judicial business for themselves to whom it was unlawful to enter there. For this and worse than this is what we have heard, most beloved, from those who are come from thence. However really, then, they seem to hold the church, so much the more truly are they cast out. And they think themselves to be within the truth, but are exiled, and in captivity, and [gain] no advantage by the church alone. For the truth of things is judged…

Published in Fetzen Fliegen
back to top
Last modified on Friday, May 2, 2014
Tweet

More in this category: « The Wanderer 'Shocked' by “Traditionalist” Pusillanimity St. Pius V: The Pope of Quo Primum »