Freedom Rallies epitomize the Modernist Dream - so where are the Bishops? 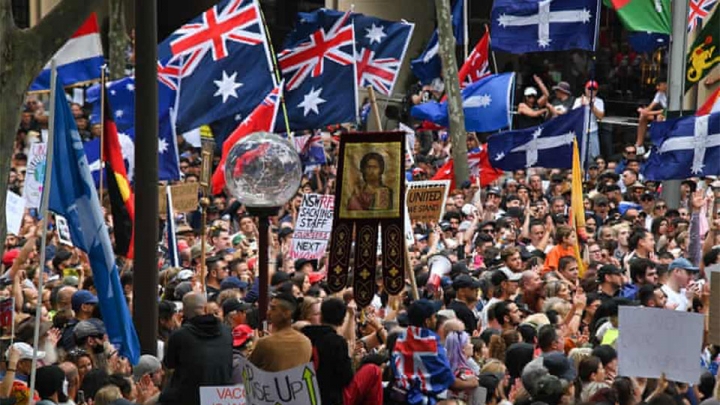 For more than fifty years, Catholics have been encouraged to reimagine the Church as a tool for building a humanist utopia on earth rather than as the means of teaching, governing, sanctifying and saving all men. Freemasonic ideology, assisted by globalist entities such as the United Nations, has fed us dreams of “peace in our time”, and of a “world without borders” and of a Brotherhood of Man whose common destiny is a heaven, based not on our worship of God in faith, hope and charity, but merely on our participation in the human race.

As a response to the tyrannies being inflicted on the populace under the guise of “health orders,” rallies for freedom have been emerging and they have all the flavour of that so-called Brotherhood of Man. Two recent articles by this author for The Remnant describe how Catholics in Melbourne have formed their own contingent within the vast sea of secular protesters, fulfilling the prediction of Archbishop Sheen that it would be the laity who would save the Church.

Last week’s Melbourne rally is said to have been the largest protest ever to have taken place in Australia, with hundreds of thousands present. According to Google’s “crowd-estimate” app, 300,000 gathered at the march’s terminus, Flagstaff Gardens, after walking the three kilometres through Melbourne’s CBD from Parliament House. Many more lined the streets or remained outside Parliament.

At Sydney’s rally, a politician led the crowd in the Lord’s Prayer, while an Orthodox crucifix adorned the speakers’ stage. Two hundred Catholics prayed the Rosary then joined with their 100,000 fellow protesters, carrying a statue of the Sacred Heart.

Similar scenes took place in other Australian cities as well as all around the world. At Sydney’s rally, a politician led the crowd in the Lord’s Prayer, while an Orthodox crucifix adorned the speakers’ stage. Two hundred Catholics prayed the Rosary then joined with their 100,000 fellow protesters, carrying a statue of the Sacred Heart. These are very unusual occurrences for a highly secularised nation like Australia; compared with the United States, Australians are generally quite intolerant of overt displays of religiosity.

Walking through Melbourne, following the statue of Our Lady held aloft, and joining in Rosary after Rosary, I reflected on how closely the scene before me aligned with the kind of world and Church envisioned by the Second Vatican Council. It brought to mind Chris Ferrara’s memorable article[1] which compares Vatican II to the great hippie festival, Woodstock, held in 1969. Mr. Ferrara writes:

“The Church’s own version of the spirit of Woodstock persists to this day, prowling about in search of the “new humanity” extolled in Gaudium et spes and the “new advent of the Church connected with the approaching end of the second millennium” proclaimed by John Paul II in Redemptor hominis.”

The melting-pot of nationalities, ages and ideologies at the Freedom rally looked very much like “the new humanity” for which our bishops have been craving. Since their words and actions reveal that they have by and large rejected the traditional Church, eschewing Her for the “reimagined” version, why are they not present when these genuinely tolerant events take place in their own backyards?

The only fear that helps the world is the fear of God.

The “why” is a question that demands an answer. Dom Prosper Gueranger had some thoughts about Christians who are found to be missing in action which might shed some light on our bishops’ absence:

This cause is unhappily to be traced to that general coldness, produced by effeminacy, which might be taken by itself alone as the type of the age; but we must add thereto another sentiment, proceeding from the same source, which would suffice, if of long duration, to render the debasement of a nation incurable.

This sentiment is fear; and it may be said to extend at present to its utmost limit. Men fear the loss of goods or position, fear the loss of comforts and ease, fear the loss of life. Needless to say, nothing can be more enervating, and consequently more dangerous to the world, than this humiliating preoccupation; but above all, we must confess that it is anything but Christian. Have we forgotten that we are merely pilgrims on this earth? And has the hope of future good died out of our hearts?[2]

The only fear that helps the world is the fear of God. But many prelates are instead paralysed by fear of a virus. If only our bishops dared to poke their masked faces outside of their sterilised walls, they would witness something very like the elusive “spirit of the Council”: young and old, learned and ignorant, decorous and crass, believer and non-believer, vaccinated and non-vaccinated united in hope to fight for their future.

Have we not been told to unite, and to end the division across such lines as liturgical preference, or devotions or even doctrine? We have: even to the point of suppressing the Mass of the Ages and of giving Holy Communion to heretics. Therefore every bishop who takes the Modernist dream seriously needs to see the charismatics rubbing shoulders with the traditionalists, and Novus Ordo Catholics walking beside members of the SSPX. They need to see Society priests giving a blessing to the sundry Catholic protesters and they need to witness the respect given by the non-Catholic crowd, many of whom still harbour a deep resentment for the institutional Church, to those serious young men in their cassocks.

Every bishop who shuns proselytism needs to go to one of these rallies to see Our Lady doing the proselytising on their behalf. They would witness Moslems walking behind Our Lady of Fatima, following the modest, veiled Woman with Her hands folded in prayer.

Have we not been taught never to actively convert anyone to the Faith? Then every bishop who shuns proselytism needs to go to one of these rallies to see Our Lady doing the proselytising on their behalf. They would witness Moslems walking behind Our Lady of Fatima, following the modest, veiled Woman with Her hands folded in prayer. 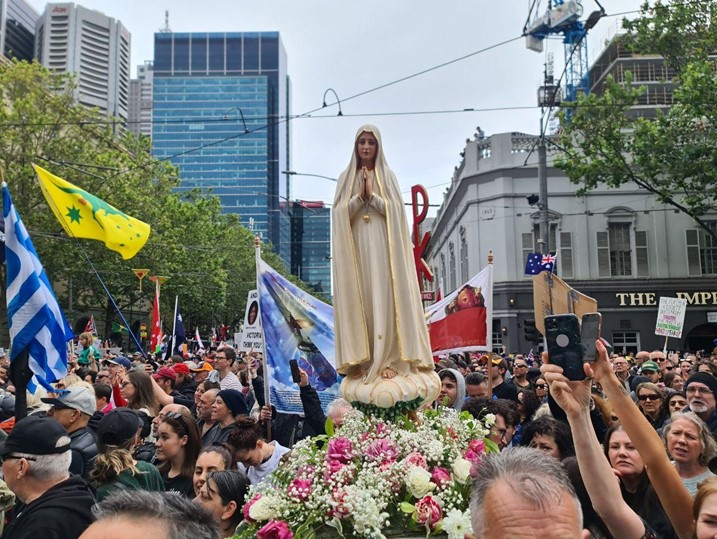 Have we not been told that ecumenism is king and that we have much to learn from our Christian friends? Then our bishops should witness Protestants, invited to Melbourne’s rallies by this author, standing up with Catholics against a despotic leader. One who, like Mr. Ferrara, was present at Woodstock fifty years ago said, “Then it was a long-haired teenager marching against a corrupt system, and now [it is] an old guy marching against a corrupt system.”[3]

Now, exposing this notable absence on the part of our bishops isn’t simply meant to catalogue their latest failure to do their job. While it’s obvious that they are far more likely to give a prominent bad Catholic Holy Communion than an interdict, the inability of our prelates to oppose tyranny has very sobering implications - implications which they ignore at their own peril. In one Australian state, for example, the army has begun rounding up citizens and detaining them against their wills for the “crime” of testing positive to COVID[4]. Other state governments want to do the same while the Victorian Premier is presently attempting to take away his citizens’ right of appeal if they are unjustly detained.

He quoted Solzhenitsyn’s words: “You will only understand it all when they bellow at you ‘Hands behind your back’, as you yourselves trudge off to the Archipelago.”

So if our clerics place any value on their individual freedoms, then they must not underestimate the potential failure of their appeasement policies. Popular strategies such as dialogue and tolerance might work for a time while political actors have something to gain, but history has shown the fate reserved by tyrants for Catholics, especially clergy, without respect for their levels of orthodoxy or acquiescence.

The figures speak for themselves: Nazi concentration camps claimed the lives of at least 3000[5] Catholic clergymen; Communists in Russia murdered over 400 priests and more than 100,000 Orthodox clergy;[6] Pol Pot had almost half of Cambodia’s Catholics killed in the 1970’s - despite them making up only 4% of the population;[7] and in present-day Nigeria and China, priests, seminarians and bishops are regularly murdered and kidnapped - the whereabouts of at least one Chinese bishop who was detained last May is still unknown.[8]

Michael Davies understood well the futility of dialogue when, in criticising the failure of the Council to condemn Communism, he quoted Solzhenitsyn’s words: “You will only understand it all when they bellow at you ‘Hands behind your back’, as you yourselves trudge off to the Archipelago.”[9]

If our bishops believe in something - anything at all - other than their own personal comfort, then they will come out of their hiding places, join the laity and face the crowds. But if a prelate can’t see that there’s a detention cell waiting with his name on it, then not all the flower garlands in the world will do him any good.

Latest from Remnant-TV.com - THE ONE WORLD RELIGION: Francis and the Abrahamic Family House

[Comment Guidelines - Click to view]
The Remnant values the comments and input of our visitors. It’s no secret, however, that trolls exist, and trolls can do a lot of damage to a brand. Therefore, our comments are heavily monitored 24/7 by Remnant moderators around the country.  They have been instructed to remove demeaning, hostile, needlessly combative, racist, Christophobic comments, and streams not related to the storyline. Multiple comments from one person under a story are also discouraged. Capitalized sentences or comments will be removed (Internet shouting).
The Remnant comments sections are not designed for frequent personal blogging, on-going debates or theological or other disputes between commenters. Please understand that we pay our writers to defend The Remnant’s editorial positions. We thus acknowledge no moral obligation whatsoever to allow anyone and everyone to try to undermine our editorial policy and create a general nuisance on our website.  Therefore, Remnant moderators reserve the right to edit or remove comments, and comments do not necessarily represent the views of The Remnant.
back to top
Last modified on Saturday, November 27, 2021
Tweet

More in this category: « CATHOLIC FOREVER: Why Francis will never run me out of my Church SOS for Australia: The December 4th Event for Freedom and Democracy »