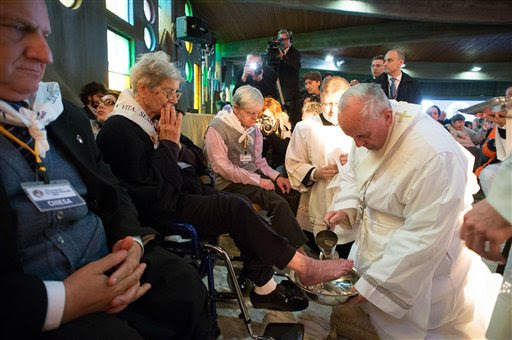 (Above Photo: Pope Francis Washing the Feet of a Woman on Holy Thursday 2014)

"...as we advance into Holy Week beginning with Palm Sunday it's worth noting that all over the United States and many other parts of the world, the Sacrifice of the Mass which brings an official end to Lent, the Mass of the Lord's Supper, the Last Supper, Holy Thursday, will be marred by abuse in thousands and thousands of parishes. Why? Because in a tip of the hat to political correctness, or wanting to make nice nice with everyone in the parish, or to go out of the way so as not to offend anyone, at all, whatsoever, or in some cases owing to a dearth about the dignity of their own office as priest, priests all over the place will wash the feet of women and children during that part of the Mass that most of us have come to recognize each Holy Thursday evening.

...The liturgically abusive practice of washing the feet of women and sometimes children has become so institutionalized and common practice that no one pays any attention to it anymore. Nevertheless it remains a very grave abuse.

...The washing of the feet is directly linked to the male only priesthood. While many of the laity have no idea about this link, many the modernists do. In fact, the reason they like to distort this part of the Holy Thursday liturgy is to push the cause for women priests. The Mass on Holy Thursday is about the institution of the priesthood and the washing of the feet...is intrinsically linked to the priesthood.

...Now it may very well be the case that large numbers of priests have simply been instructed very poorly in all of this. After all, it would be a little naive to think that it was only the Catholic laity that got poorly catechized during the crazy days of the past forty or fifty years. Many seminaries also did an extremely poor job transmitting the Faith to their priests in training. Whatever the case may be, here is the simple take away. The washing of the feet is intimately linked to the priesthood because it was performed by Our Blessed Lord on those he was about to make priests at the Eucharist. Only men are to have their feet washed...When some other variation is done, it confuses the faithful and is a grave abuse because it tears away from the sacred character of the priesthood instituted by Christ Himself on this most holy of nights.

Click below to see Michael's original video in its entirety...

Published in Fetzen Fliegen
back to top
Last modified on Tuesday, April 22, 2014
Tweet

More in this category: « The Remnant’s 2014 Christmas Offer Archbishop John Nienstedt--a man with many enemies--resigns »